Is this the best moment in the history of Sky Sports..

Happy with a winning day but could of been so much better. Won €100 on the first IPL match was so up €150+ at one stage, then lost €100 on the second game. KP and Kallis partnership 29 off 35 balls. I was fooking seething! Terrible, woeful, awful batting when youre chasing 184, the annoying thing was the rest of the team were OK, dont really blame Kallis, more so KP, but they threw away the game with those few overs and Lumpy really put the boot in, 1.6 to 1.36 without a wicket falling. First game was much better, KKR set a record total for the ground, sent them to 1.17, but Punjab came out whacking it and after 3 or 4 overs I just went with the momentum all the way to the finish.

Had the live feed ahead of SIS for the few races that were RTE from Fairyhouse so made that pay with €40, my god it would of been much more had Zaarito stood up, managed to lay back my stake thankfully but he breaks my heart.. why does he always have to fall when looking like hes pissing it! Exactly like Big Zeb though, he'll skate in at biggish odds at a big meeting, maybe off good ground too. I know they were only turning in today, but he was cruising, absolutely cruising. Remember Leopardstown he fell at the last too when about to take the lead, head in hands man.

Anyway, a winning week, boom! Crickets come good after a while, think I'm settling down more now into IPL, before I was almost too keen to make money on it trying to click every two minutes looking for swings. But the more I actually sit and wait, the better. Only time I was hung, drawn and quartered in the market was the second game today, apart from that been in good shape. Filled in bits and pieces with the horses and boxing, which is the aim really you know, no airs or graces winning thousands, just fill in the gaps. 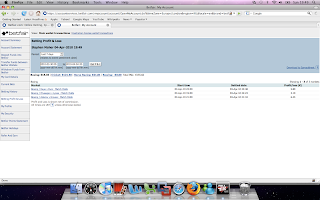