Amazing how when you nick a few quid off every market, it all builds up rapidly. Its completely underrated too. 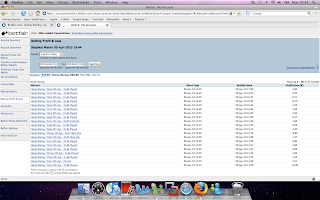 Have to say too, nice to have the grass flat meetings back, bit more excitement than the jumping. And lovely that we had races today that had more than 12 runners. The 5, 6, 7 runner races normally during the week are no craic. My biggest problem is when theres 7 runners in a jumps race, 3 places (been a non runner), only money on the lay side for 2 horse in the place market in running, I drift off day dreaming during it. And in order to read the race properly you obviously have to watch it all! I dont, I zone out thinking what biscuit shall I have when I make a cuppa tea later. But the more runners, the more money in the market, the more focused and on the job I am. Its pretty much exactly what all my teachers said in school, I'm bright when I what to be but just a lazy fooker.

Amazing scenes in the cricket today. Think about this one now - have you ever seen a game won by a side who didnt trade under 1.5 for the whole game? Mental.

I often speak to my mate Dec, whos a big cricket trader too, about why it is I always seem to be on the wrong end of collapses. And the conclusion I came too is because generally when looking for a trade I back the chasing side (the batting team), why? Because I always have the market going with me for runs, and the only way it goes sharply the other way is a wicket, I can get out more times than not for run rate pressure. I only back in the second innings too so basically the market is governed by runs/rate/wickets.

Today I laid Deccan who were chasing (they ended up losing!) and bottled it because the market moved against me for every boundary, it was a mental game by the way, glad with a €35 loss at the end because it was one of those real bank busters, but anyway I'm brutal at laying the chasing team and holding out while runs are coming. But then, the pressure on you builds and builds, you lay 1.5 - it goes 1.4, then 1.3 then 1.2 and youre thinking train, money gone, game over, get out. Then a wicket goes and the market bounces back to 1.7, you'd be in clover if you held on. How in gods name do you not chase 74 off 60 anyway! That was the reason I redded out, thought it was GSM. But I said the other day: "Its a funny game in the sense that you probably back 1.6 thinking "they wont get them" then because of a good start, you panic and red, then eventually end up losing on something you were right with in the first place." Thats exactly what happened. Again.

Watched the Tiger press conference on the news there, no money on it, but christ I would love it Kevin Keegan style if he wins the weekend! "What are your expectations this week?" .. "Nothings changed, gonna go out and win this thing." Goosebumps, wouldnt it be epic if he won.

Then they followed a man of esteem like Tiger with a Geordie fan "What are you expectations for the Premier League next season?" .. "Wye aye man, Champions League place minimum innit.."
Posted by Stephen Maher at 4/05/2010 08:01:00 PM