I dont think there'll ever be another dart player as good as Phillip Taylor, you run out of words sure, two 9 darters in the one game, history. Total and utter privilege to see it live, amazing scenes.

Anyway, the cricket and the horses did well today, Windies really are gash theres no other way of explaining it, it annoys me to say it because I like them, theyre nearly everyones second team and Chris Gayle is obviously the coolest man on the planet. But theyre hopeless unless its T20. Saffers should really be beating them when you think about it so probably best not to be too harsh, its just all the dot balls they let build up, the shite fielding and the poor bowling, it all adds up after a while you know. I think the thing that annoys everyone is they *could* be better, but for whatever reason they just arent, theyre going backwards.

Did in running from the two RUK tracks to nick 20 quid, only one on tomorrow and thats national hunt so giving it a miss, no cricket listed on Sky either so going to go play golf instead. If I hang around the house and try to win just say €30 I'll only end up doing my head in trying for something that isnt there, this time last year I would have done it though, getting more sensible in old age I reckon.. 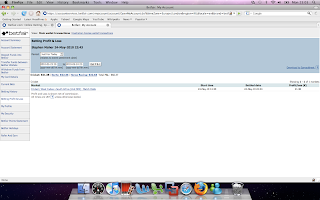