Difficult enough to trade other sports with The Curragh being on this weekend. Superb weather though, think the horses are really starting to kick off now, longer it goes on too the less they'll "need" the first run. Anyway, bitterly disappointed with Fencing Master in the Guineas, last time I'll back him I'm not one for following horses, he was beaten around halfway and all, very poor. I had doubts about all the opposition and none of them placed, two outsiders, fair played to Canford Cliffs though, no questions about him getting the mile now, he looked good, still would of thought Fencing could have at least beaten the others you know. Steinbeck ran well on his first run, dunno where he goes next because hes hard to train (understatement!).

I really love Samuel Morse though, and Johnny got into awful trouble stuck in behind horses, I was cursing him, horse got him out of jail though and he really does have serious gears when he needs them. Easy win for Fame too but the Godolphin horse didnt turn up there, not his problem though all he could do was win handy and he did.

Jan was impressive to the eye today but he posted a poor enough time looking at it and that race has a horrible history of horses bombing in Epsom from it, beat Shintoh 2L just say, and he beat Encompassing only 3 and a half lengths who is probably one of the worst horses in the yard, biggest dog anyway. Obviously hes shortest in the betting of the reserves because he won today and people like to back whatever happened last. Cape Blanco was 5/1 after the Dante but its been a couple of weeks since so hes out to 11/1 now, hes not flavour of the month anymore the poor bugger..

So, that puts AP with the first four in the betting and nigh on half the field come two weeks. They cant all run FFS. IMO four will run (I think). Two pacemakers, At First Sight and Bright Horizon if he comes out of today well. At First Sight fairly trustworthy to do it himself though.

And then one of the reserves, dunno which one, two if he feels like it but theyre fair horses in their own right and could mop up other races with them so dont need to waste them all in one race, even if it is "THE Derby" if St Nic cant beat horses like Bullet Train and Rewilding sure then we might as well all pack it in. I'd be annoyed if he ran them all personally, but obviously over the moon if St Nic just has to beat stablemates, because hes always been miles and miles better then all of them in Ballydoyle anyway.

Been an alright punting week, struggled to end plus €60, minus €67 on the horses on Betfair was an arb and got €85 off PP for it, in running went OKish too. Traded the cricket very poorly but got away with small loses when things have went bad, traded actually quite good at times too but was behind when I did do good, like €80 awe-red turned into €20 awe-red, thats good, just what got me there before that was shite. Dont think I did anything very wrong, but still happy to finish not losing the way it panned out. Boxing was a non event and so was the GAA - still seething at the new hand pass rule.

By the way, seen the front of the News Of The World today, havent read it or indeed know who your one is, some royalty from England or something. But seriously, thats John Higgins, John Terry, Joe Calzaghe and your one all filmed being offered free money in the past few weeks. I mean, how can they not know theyre being set up at this stage.. its all the same too, we give you money and you do something, exact same, do they not stop and think "hold on now, havent I read this somewhere before.."

Jose Mourinho is also THE DADDY! Have €16 with that Titanbet crowd now, but they dont bet on much, will leave it in there until the World Cup and then mess around with it. I'm a hopeless football judge so it'll give me something to do without going skint. 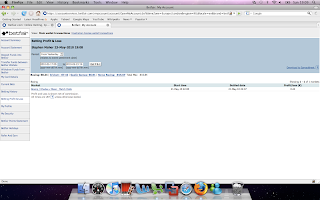