Essex needed 78 off the last 5 overs to win, needed 22 of the last over to win, Scotty Styris hit 106 off 50 balls, plus the ground was packed the atmosphere was amazing, it was unreal viewing, 1.01 busto obviously coming from that position. Then in the boxing, McDermott v Fury was amazing again, Fury was 5-0 up (IMO), when he started to look completely shot for energy, odds went from 1.2 Fury to 1.5 McDermott in one round without a knockout or big punch, never seen it before. I was thinking if Fury could get to the bell, sure he nearly had the fight in the bag with the rounds in the bank he didnt have to do much, had a lay, then McDermott was goosed for energy and couldnt stand. Unreal viewing, Fury said after he hurt his hand in the 5th, maybe that was the blip, but what a market, swung down, swung up, swung down, that never happens in boxing.

Been some serious sport on this week, England beating the Aussies from 1.25, Isner v Mahut, Fedex looking finnish in the first round, I heard 1.01 got busted in some game today but not sure which, Scotty Styris innings, plus the World Cup and then what a fight that was. Its Irish Derby weekend too, I'd normally be well "up for it" but it looks a terrible renewal, but the sport going on this week, its just amazing.

Its not even the weekend yet, normally everything happens the weekend. You'd have to go a long way to top weekday sport this summer.

One small drawback is I'm nearly running on empty myself, cant see where to take a day off either, I've been sleeping in longer and longer as the week has been going on, Royal Ascot last week feels like a month ago and that was only last week. I'll go until I can go no more anyway, I'm back to London next week but thats for gambling reasons too so no rest for the wicked. I'll rest when were back to the jumping and its called off for snow!

I get my exam results next week too so I'll know what I'm doing with my life then (yeah bloody right!). "Where were you when that happened Stephen?" .. "I was on Betfair." Cant see that changing in the near future, but the thing niggling in the back of my head is what am I gonna do for the winter, there'll be no GAA, no cricket English hours, no flat racing and jump racing Mon-Fri last year bored the hell out of me, I wont be blessed with the sport thats on now, and I cant sit around the house you know, but I dont want to start a whole new commitment to a college course just because I've nothing better to do. As always the response to serious life questions is "I dont know." 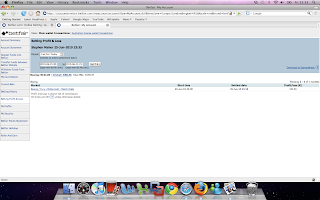