We are fooking useless! First we cant beat Louth and then draw with Antrim after being three points ahead the whole game, two points ahead with minutes to go, the only game still going FFS. 17 (yes 17!) wides. Brutal. The worst part is I backed the mugs as well. 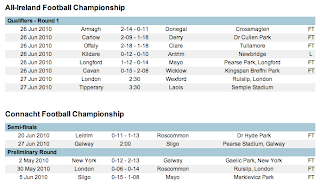 Climbed into Durham a bit too much earlier when Taylor was batting, then he went and another wicket too, I was in a bit of bother, happy enough with a loss of €50, it was a straight train to 1.01 after and I had €175ish red on Northants at the time, could of easily let ego get in the way or whatever and leave it, took my medicine. One of those markets where I lose, but I'm as happy as I can be with losing, even though no one likes losing, but it was a bad position got out of at the end of the day.

Remember When lost too adding €70. So its a losing day of €230, I'm not too bothered about the money, I got the horse at 11/4 and she was 7/4 no issues there, I got out of the cricket well with a loss of €50, its just Kildare being absolutely pap has me in a bad humor, useless bar-stewards, buggered if I'm going to Croke Park if they win, they can stick it! Leinster final last year, cant kick a ball this year.

I suppose another point is, I went to all the trouble at the beginning of the year when I was level from January to March to see what to change, and it was obvious I'm ten times better in running than pre-off, so I made an effort to quit pre-off, I've won nearly 3k since discovering that. Lost €180 today pre-off. The Kildare market wasnt going inplay so my hand was forced, but I really should just give up pre-off and make no exceptions.

Still a good week though, no complaints and no knocks in confidence or good feeling, just FFS kildare!

Minus €500 with William Hill on the horse arb, so its worse than Betfair looks. I'm still plus €200 this week so happy enough and where I want to be, ahead, probably just take it easy tomorrow and settle the ship as always after a losing day.
Posted by Stephen Maher at 6/26/2010 08:50:00 PM