About one minute in.. "Ah I cant sign Rangers gear, no chance" haha!

Alright, so I promise to never back Pakistan again.

You'd think T20 would be their best chance and bring the two teams closer together, SPs of 1/2 England 2/1 Pakistan arent right IMO but well, Pakistan are shite. Obviously the match fixing stories make life worse atm - I wouldnt normally be involved in scenarios like this because I dont bet first innings but like I said the SPs.. not again this summer though, wouldnt back Pak at 1000/1 for the ODIs. Ended up this evening with -€20 Eng and -€240 Pak, never great craic positions like that. 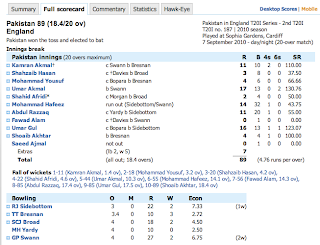 Thankfully the Champions league kicks off Friday in Safferland so there'll be plenty of games, theres only two games left from the English domestic on TV, I still dunno about turning nocturnal for the winter, whatever about the money aspect of it, I actually really want to watch the Ashes anyway.

The worst thing about the winter tends to be you have nothing to do Monday through Thursday and then tonnes of stuff happens Friday through Sunday. I wouldnt mind sleeping from 10 - 6 each day and betting all night - just have to do it properly, if theres anything I learned from last year it was having a normal day and then attempting to stay up all hours and be alert is impossible. If I did get up at 6 in the evening it wouldnt change much, it'd just mean my mornings are everyone elses evenings.. pints for breakfast? I'll have an orange juice please, ta. Obviously though it has to be planned out around what games I wanna do and normal life, it'd be weird alright.

In case you havent seen the Mayweather video with all the fuss its below, I'm a big fan, but hes a bit of a coont to be fair here. I cant understand half of what hes saying but some of it is fair bad. Reebok gave him a million for three weeks though, I'm clearly in the wrong business..