One of my main approaches to betting is to never let anything from the 'outside world' bother me, press, opinions, people, etc, and just get on with what I'm doing myself without prejudice, grudges or bitterness (be happy and fook it in other words), so its just me, the odds and the event - with nothing clouding the issue.

HOWEVER, how fooking annoying is that new Betfair ad! Sky keep playing it too during the cricket its doing my head in, "On Betfair you cut out the middle man, which means you could win bigger" - errr, except for when you win too much and then Mr Milky man comes and robs you every Wednesday morning for the PC, or commission. Besides, theres no middle man when you bet with the books either FFS. What a shite ad. (I dont pay the PC by the way my average is grand because I have losses as much as wins). Head in hands man anyway FFS, get a real ad.

Anyway, spent yesterday wondering what to do and where to be, the four cricket matches all overlapped each other at some stage, United v Everton, both St Legers, Greyhound Derby final at Shelbourne, the Klitschko fight and the US Opens semi finals. People always say stuff like "What a great weekend of sport," not if its all happening at the same time! Cant be everywhere at once and I ended up getting nowhere, the slightly annoying thing is from Monday to Friday we only had one England T20 game on Tuesday at 6-00, which overlapped with England playing footie too, genius planning.

Today was better because I focused on the one event, the ODI, Englands batting was poor at the end though, cant help but feel I gave away €100 going equal green during it, they made me do it though losing wickets and letting the rate go up. In an ideal world I would have stayed with all the green on Eng but doubt crept in.. I was lucky too because Pak dropped catches again and Strauss was caught behind but not given, from the break though I always thought the odds were the wrong way around so was always sitting handy.

An odd week would be an understatement. The Villa manager market settling adds so I suppose that makes it look better than it felt - I had nothing at all to do Monday, Wednesday, Thursday, lost Tuesday but kept it small, scratched around Friday and Saturday managing to finish level-ish while doing things poorly, and then I hit one good market Sunday and I'm in clover in appears. You cannot teach it! I always battle to finish level when things arent great though, I think maybe sometimes theres an obsession with winning and people actually lose from trying to win, if that makes sense, (no it doesnt), sometimes you just cant win, and trying for the win when you cant leads to losing.. I try to accept those days more and more.

Same with last week too, less and less horse racing has improved the other sports no end, so much work with the in running delays for little return. More time on the other sports seems to be more worth it. 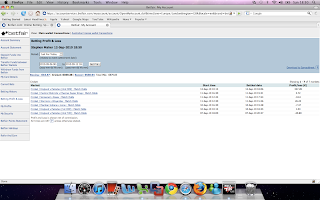