Isnt it funny the way the world works.. newspapers (who have been known to write anything and everything) say hes drunk while being interviewed - and everyone believes them, then the man himself says he isnt, right from the horses mouth, the inside line, Brian Cowen himself - and no one believes him. Its all barking mad. Thats the final nail in the coffin for me running anyway, cant go for a round of golf on a day off and now cant even have a pint either. What a shite job, best stick to the gambling.

I'd actually make a pretty poor Taoiseach to be honest, if someone started complaining to me about what I do on time off I'd actually plainly tell them to go fook off, thats why I vote for this fellow every year..

Anyway, its all politics. You'd be hard pressed to find a large amount of people on Betfair who havent at least dabbled on tennis, I'm always told how its "great for trading" and people often ask why I dont do it. Well, I'll show you..

Its cos I is a mug innit! My average odds on the lay say 1.26 but in reality most of the damage was done laying 1.5ish and then Nadal hitting 1.2ish, lost €90 on that trade, and then proceeded to lay 1.22 red at 1.19, lay 1.24 red at 1.2, lay 1.27 red at 1.21 - as you do like. Problem was, and I only discover after these events, is that I wasnt clicking with conviction or having a strong opinion, so the slightest thing going against me means a change of view. One of those where, would I be clicking if I wasnt already involved or awe-red, probably not. I'm just no good is probably the biggest reason anyway sure.

Tennis is a funny sport in terms of momentum, I'm far from an expert but from an outsider looking in point of view, a player could win a massive game you'd think and would be great for confidence, match momentum etc - but then the other fellow serves and its 40-0 because serving is such an advantage. It doesnt seem to have much of a natural flow to it like most of my other sports - for example boxing, the ring doesnt change, the gloves, the time, just stand and swing basically but no one has an advantage in one round compared to another round - that tennis serving has. Thats where I got all my laying 1.22 redding at 1.19 from anyway. Maybe I should just do everything the opposite of what I think and then I'd be in clover?

I said best stick to the gambling instead of running for Taoiseach, I should probably best stick to the cricket and stuff I know inside out instead of jumping over to tennis anyway. It wasnt poor discipline however though, thats a crap excuse, I made the conscience decision to trade it and fecked up - no poor discipline there just me being a bellend while trading it after making up my mind.

Anyway the cricket, these Champion League markets are REALLY favouring the Indian teams, shockingly so, the prices were so far wrong today it was unreal. Unreal. Cant even begin to explain. How is 94/54 on a flat pitch with 10 wickets left ever under 1.3? Totally not taking on board how much 10 wickets mean in terms of swinging from the hip towards the end. Competition is made up of all the best teams from the countries too, thats just one example but it was so far wrong the whole game. Whatever about the odds, still need events to go your way and luckily that happened today, the weekend and yesterday Lumpy and his Indian friends got away with it. Thought they were getting away with it for a bit today too, three catches on the ropes, two off full tosses FFS, each catch was going for a six too, how lucky can you be. Pet hate in cricket got to be wickets off full tosses, and shite wide short balls - that would probably explain my dislike for Stuart Broad I suppose.

Happy to come out winning anyway given the tennis, no complaints about losing on it either. 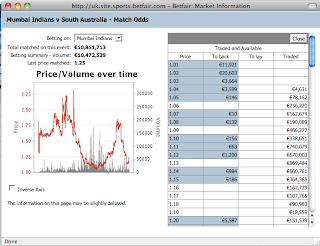 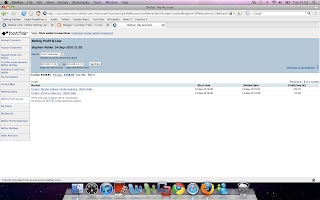