Not much happening this week, both semi-finals didnt really suit (first innings was a winning score, price too low to back, no real scope for a bounce out trade either), and the final was down to 1.14 by the innings break. Sky put on two fights this weekend.. SPs? 1.08 and 1.06, bah! The GAA finished for the year last weekend.

The biggest challenge of winter already appears to be sitting on my hands while nothing appeals. I'm 9 cent richer than I was on Wednesday though, boom.

Away from the challenge though we had some craic today backing a 20/1 - 18/1 winner. The horse is trained just on the outskirts of Kildare in Kilcock, but actually headbutted my mate right slap bang in the face the other week, naturally hilarious when it happens to someone else bar yourself to laugh at them (it wasnt hard), hasnt lost a race since the headbutt! I had a tenner on as a joke more than anything to humor her, bolts in in Ascot of all places.. cant wait until the next horse headbutts her now we'll be able to lump on. The holy grail whaaa? Wait until a horse headbutts your woman then back it. 100% strike rate here anyway, studying form is overrated. 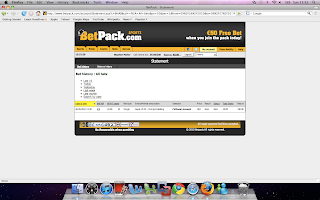 Betting tax was back in the paps yesterday, I have no real worries with them taxing shops, ways around that sure. The last paragraph bothers me slightly though:

It is understood that the Government is also considering wider reform of taxation on the gambling industry by extending the existing 1% tax rate on turnover to internet operators.

Apparently the books will absorb in the shops, because if it exists just in the shops and not online sure you'd be a fool to bet in shops then, so everyone would end up online. Who knows what will happen online though and through Betfair if they target that, that last line just leaves it hanging out there. But you know, talking about it is silly at this stage because youve no idea what will happen until December so we might as well just wait until it comes in and we read the rules, were guessing until then sure.

Its a bit of a muggish desperate money grab to me and will drive more people away than good it will do IMO, the clever idea might be to look at how horse racing can make up its 30 million levy shortfall, but sure expecting the HRI to be clever would be asking far too much, so we'll go cap in hand to the government, who cant really afford anything at the moment either.

Anyway, this week has been OK, even though I've lost it actually felt better than last week and the week before that winning. Monday was a shocker alright but nothing else has been bad, lack of opportunities maybe but not losing on muggish bets through boredom is the achievement there.

Looking at the Sky schedule for next month its pretty depressing on the cricket front, nothing at all next week, perfect chance for a total week off with no Betfair. Were off on our yearly jaunt to Paris the weekend for the Arc anyway and theres no Betfair in France with the law there - but there'll be nothing to bet on midweek either. I know I say this every year but its cheaper to fly to Paris and go to the Arc than it is to drive 20 minutes to The Curragh for a days racing. Really hoping for a good day anyway, maybe get the spark back for the horses, hopefully APOB will have a winner.

Also, highly recommend watching An Idiot Abroad, first episode is on Sky Anytime at the moment, dont normally watch too much TV, mostly movies, but its brilliant. If you like laughing at people hatin' everything its very good. Funniest bloke without trying to be I've seen in ages.