Literally cannot explain how annoying X Factor is changing the rules, FFS seething! Absolutely gutted. Why they changed from a bottom three to bottom two I dunno, and they even changed their rules, from here. Betfair void the bottom three, fook sake! Miss out on another €300, we had no bottom three the first two weeks either and then the week we do they go and change the rules, disaster. I'm still 100% sure Wagner wasnt bottom three, and it was such a bugger watching the results being called out knowing I'm a winner but knowing they'll void.

I suppose it is a little lesson in a sense, because you think to yourself 'I'll do this and that' and plan for the future, then BAM, the rules change, the league changes or Betfair changes and youre finnish.

On another note, John was second on and went, early really is the coffin slots.

Speaking of being finnish, my mug treble went up the swannee after 5mins in the City game with the red card, by that stage Liverpool were winning and United had won, so I had a 6/4 shot at 6/1.. only lasted 5mins though. Was still quite impressed by City at times, backed the draw at 6 at HT, but it was always an uphill battle. Accums eh, one always lets you down.

Anyway, its been a good week nevertheless, boxing chipped in this morning to cross out the football accum loss so that was grand, the cricket was good again and the International Rules was a change and a good winner in Boyles. So gutted with the X Factor voiding though, was a €300 winner not paid basically but hey ho, what can I do.

Pacquiao v Margarito 24/7, love watching 24/7 they do it brilliant always gets you looking forward to the fight.. I know from experience it always looks like Pacmans had a bad camp, so I back the other fellow, then he gets absolutely hammered, so I'll be ignoring the "his heads not in the training" etc etc this time. 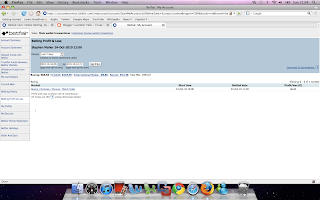