I plan to do nothing but lie on the couch today and not move a muscle.

Liverpool (I know, I know) look quite big against Blackburn at 4/6, I know Liverpool are, well, shite but Blackburn are only just above them in the league and are hardly great themselves, 4/6 at home seems big IMO. It could well be a 0-0 the way Liverpool are but surely if theyre going to win a game todays the day.

Stoke are only one point ahead of Blackburn themselves, and seem to be a force at home, but I fancy United to get a 1-0 or 2-1 though. The fact the Rooney thing has been put to rest will help, I'm a United fan so maybe bias but I reckon they'll get a result and 8/11 is a few ticks bigger than Betfair. I'm be disappointed if they didnt beat Stoke, even though its away.

And City to beat Arsenal at 6/4, IMO City are a much better team playing the big teams, maybe its the only games the overpaid stars really go at, theyve beaten Chelsea this season and Liverpool so it seems they fancy the bigger games, dont fancy Arsenals young team away from home and 6/4 seems big enough for City.

Liverpool and United are bigger with PP than on Betfair by a few ticks and Man City are a few ticks bigger on Betfair but commission would nearly level it. It works out at 6/1 which looks pretty decent IMO.

Football accums are for saps I know, 6/1 is worth a poke for 50 quid though. 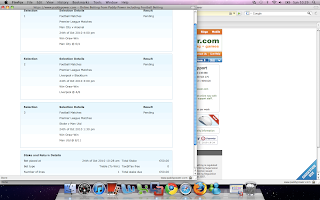