Well, I set my alarm for 5AM this morning and then proceeded to make myself €230 awe-red, I find life is too easy sometimes and its very boring just winning all the time you know yourself I need a challenge. Ended up winning €900 though - still the daddy? Check. I'm only taking the piss by the way, except for the 5AM bit, and the €230 awe-red bit, and the €900 bit, basically everything apart from the being easy bit because I was shitting it! 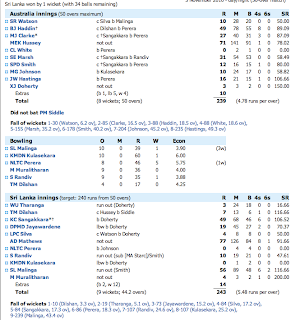 107/8 to getting 240, just phenomenal, very rare I get nervous, it was that good to watch. I laid Aus at 1.5ish, watched it go 1.01, awe-redded on the way, and then laid 1.05 for 1k, and was of the view I couldnt green at those odds (Aus too low at the time IMO until the flip flop), cant even describe the comeback.. cant even remember one like it. One thing I noticed this morning, the Betfair super-bot obviously isnt on Aussie markets, because we were getting something like 2.02 both sides at one stage and evens to lay and 1.8 to lay other side at another stage. MELTDOWN.

Market took an awful long time to react, if I remember right it was 1.4 when they only needed 16 (or one/two less/more), that was an amazing price, wickets in hand probably keeping it high but they had put on a record partnership by then. I suppose it really was one of those "they cant do it, can they?" moments.

I'm glad to win though because I made a right balls of yesterdays game, found myself €195 awe-green..

Only to muck it up and finish with a fiver, put all my green on Pak. Sigh, head in hands man, they finished two runs short.. and they only needed 22 off 18 at one stage, and 9 off 6.. Saffers went to 1.02 for big money but flipping back to Pak odds on, amazing game in itself too.

Also a note on the student march, I wasnt there (obviously!), but IMO embarrassing all the problems with clashing with the guards, what a bunch of numpties, obviously most would have been OK but the select few went for trouble and probably add a few more who had been drinking all day. Just embarrassing really, probably the right word to sum it up. Irish bonds hit 7.59% today too and finished at 7.45% I believe, pictures of riots in the capital going around the world hardly help our image as it is, and it must be long odds on we need the IMF next year with those bond rates.

There has to be cuts regardless of what happens though doesnt there, whos the power, etc etc, we cant spend more money than we take in each year, I believe its called "common sense" but its a concept lost on some people. I know I cant really comment because I've never had an actual job, so I have no taxpayer high horse to get on, but the "I pay for this" argument they seem to have doesnt really cut it IMO when we spend €5 for every €3 the taxpayers pay, try earning €300 a week and spending €500 and see how far you get basically. The numbers just dont add up, and everyone can play the blame game but that does fook all doesnt it, just have to cut things to get Irish debt under control, UK are cutting, America have massive debt too, were not the only ones, it wont last forever, and you can just leave the country if you dont like the rules. No wait scratch that lets not be sensible, THE WORLD IS ENDING. FINNISH.

Incidentally, I was watching Reeling In The Years Sunday night, it was 2002 I think, and we had an election and the biggest issue and complaint at the time they said was the economy. That was eight years ego. Then, in 2008 it was financial armageddon with everything crashing. Now, in 2010 we are FINNISH. I wonder what new thing we can come up with next year, because oddly enough it seems life goes on and the sky doesnt fall. Although were told by those nice Mayan fellows that the world ends in 2012, so thats our worries sorted for 2012, we just need to come up with worries for 2011 now. Global warming is out the window because its still freezing, Liverpool to win the Premiership? Dublin to win the All Ireland? Audley Harrison to become Heavyweight Champion of the world? The world will most definitely end then. 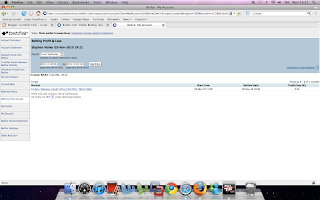 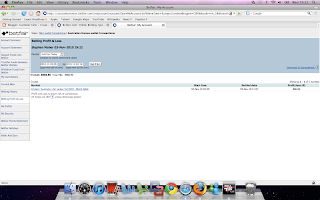