Ah, Mark Webster, had three darts at tops to hold his throw and try take it to a decider, missed and I get €9 instead of €340. Head in hands man. Cant complain even though highly annoying, he had three clean shots, its not as if he didnt get the chances.

Thats basically been my week, hit and miss, I've had some serious rides on the darts markets, I must have aged about 6 years this week! A €7.50 loss is alright considering some of the games, Whitlock, Nicholson and Taylor losing, Jenkins winning, the King market where he lost.. they were all impossible to call at times. I think Anderson will win the final, but he has a history of bottling it, I really dont fancy Lewis though, and really thought Webby would do him there, cant miss that many doubles though.

Leopardstown was excellent for the three days, in terms of craic not money, I wasnt really betting on Betfair, did have a few bets but ended up level. I didnt back him at 1/4 but really disappointed Zaidpour was beaten because he looked a serious horse from Fairyhouse - maybe it came too quickly for him after, we had snow both sides of Fairyhouse too, and Golden Sliver and Mikael D'haguenet were beaten as well, both ran the same day as Zaidpour. Hurricane Fly won but he looks a machine in fairness, although the Cheltenham hill does worry me slightly - considering what price he'll be, the decision today not to run Solwhit (well thats what Charles said anyway, if you believe him like!) is baffling really IMO, Go Native is out, Dunguib has questions, Hurricane Fly has the hill question, Binoculars had a bad run this year. A horse of Solwhits quality should surely be running in the CH, but as I said on Twitter, maybe Charles wants 1000 for a trade.

Not much trading on last weeks Ashes test, won €40, lost €80 on the Saffer-India test then on the last day, it was a swinger and I was on the wrong end of a few trades.. one of those turn off the laptop days at the time, -€80 wasnt the worst result for how bad it was really.

5th test is about to start as a type and its a horrible one IMO because obviously the draw is a series win for Eng, I hate these situations.. apparently its a bowl first pitch, then Aus won the toss and batted, so I have no idea atm, sneaky feeling for a draw but clearly not backing at the odds. So far the team batting on the first day has been bowled out day one in every test, so we'll see.. 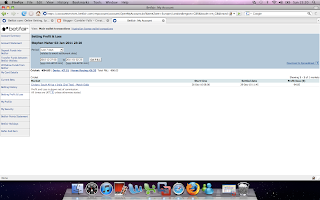 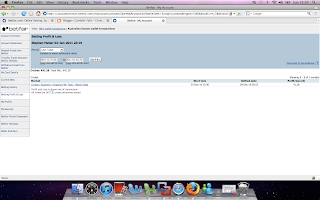