Not too bad this week at -€73.78, in the grand scheme of things that arb with Ladbrokes on Thursday was massive, but I suppose without it you'd take away -€150 from Betfair and those figures would look better to the eye, but it was plus €100 for nothing and needed. The positive thing is I havent done anything daft and stuck to the number one P&L sport, even that was a struggle but I'd imagine the other sports would be even worse.

Bit ironic really that when I stop betting on the Saffer games because I'm losing on them and winning on Eng, I begin to lose on the Eng games then. Eng were absolutely terrible though in the 2nd ODI, very un-current-England-like and going back to the old ODI team were you could rely on them to cock things up. These things happen though, during a good spell I'd shrug my shoulders and say so what, but during a poor enough spell were I'm not winning automatically think why me FFS. Aus tried their level best to cock up their chase this morning too, I backed them at 1.5 - to see Eng go 1.8 after, I was lying there at half seven debating whether or not to bother and just roll over, decided no I'll get up (dedication) - by jaysus I walked into hard work. Managed to finish Aus +€2 Eng -€110ish, stress. The Aus season will soon be coming to an end though and it was a really good one, +1.5k on Betfair and €500 from Betpack on the 2nd test, obviously things are difficult now but I hope one day to back a winner again.. eventually.. 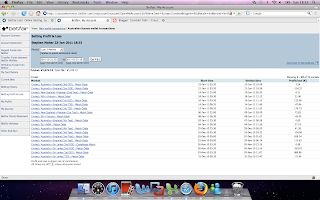 Hurricane Fly was fairly good again today, but you know its hard to get too excited because he just keeps beating Solwhit. You'd have to worry about going to Cheltenham because nigh on his whole form book revolves around beating Solwhit, and if you were to rate Hurricane highly, then you'd have to rate Solwhit too - and hes not even running in the CH. You'd have to go back to April 09 for a race where they werent first/second favourites, bar Dunguib who blew out against them - and hasnt ran yet this season. The Irish Champion hurdle scene has been a bit same old-same old, weve no real line into how good Hurricane is, Solwhit was well beaten last year but did have an interrupted prep I suppose. I hope Hurricane wins for an Irish winner but I'd have no interest whatsoever in backing him at 5/1 now.. (that'll probably be gone by tomorrow too, only 5/1 with PP, 4/1 the general price). I suppose we'll find out how good he is on the day, shaping up to be the race of the meeting at the moment.

And obviously in light of what Paul Nicholas said about Kauto "Blood test results shows signs of inflammation and low grade infection. Weeks antibiotics and easy few days," I take back what I said about retiring him, I still think hes not as good as he once was though and give him no real chance in the Gold Cup. But if he did have something amiss then obviously theres no real reason to retire him, weird thing to say about a Gold Cup winner but I'm not convinced the horse likes Cheltenham, if theres a seriously fast/strong gallop I think he comes up short.

I said last week too it was heavy odds on Cowan passes the motion of confidence, he did, but hes still FINNISH. As is the whole Government now with the Greens walking out today, FINNISH. Ireland, FINNISH. FINNISH. Kaput. The end is nigh. I've no idea why but I've found watching the news the last few days fascinating, they all talk complete shite but the hysteria around the place is amazing! No real interest in politics but I have a huge amount of time for Brian Lenihan for some reason, and find it odd how quickly the opposition want an election, obviously they know they'll win, I find it mad that everyone will automatically vote for them without hearing their reasoning/solutions/policies/etc, it kind of smacks of reaction voting (but I know nothing about this in fairness). Thats probably why I like Brian Lenihan he seems to live in the real world and keeps saying "we are where we are and we move forward," its like being €100 awe-red in the market, you move on to get green instead of crying over why you ended up red in the first place.

Maybe a new Government and we can move on, its frightening how stuck living in the past the media and everyone has become, would you believe theres some fellow who wants to pay €5k to crush Seanie Fitzpatricks old BMW, what a fooking waste of €5k, as if bashing a car will change a thing, what a fooking eejit! "You cant put a price on happiness" he says, what a mug, this idea of getting back at people (in stupid ways it has to be said) worries me because theres a fair chance we might actually end up worse off next year than we are now, because people are acting off bitter reactions rather than thinking clearly - but seriously what a fooking eejit your man is, head in hands man. You could have two months holiday for that, instead hes going to baseball bat a car for half in hour, in the cold in Ireland. Mug. Obviously not saying I'd vote for Fianna Fail now, actually no idea who to vote for, I'd go for the ones who seem to have the best ideas for the future rather than just acting on the past because the past is the past sure it wont change, sometimes I wish I was an economic and political expert like everyone else though..

Another thing, I said too I was thinking about moving to Thailand (was only an idea when I saw how cool the houses were), no one thought to tell me gambling is illegal there FFS, I did feel a tad stupid, not the first time anyway. And I have been inundated with ladyboy jokes, yep, and have such withdrawn my idea (you want to see the villa though), and obviously having an other half that doesnt have a great big cock is an advantage in life you know, so we'll leave that there, not voting for Thailand.. 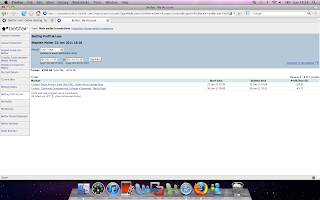 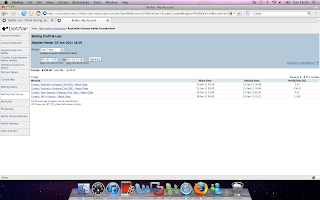