Has This Ever Happened Before?

A dodgy snooker match? Add it to the list..

The WPBSA are to investigate the Caesarscasino.com Snooker Shoot-Out match between Jimmy Michie and Marcus Campbell because of suspicious betting patterns.

The governing body were contacted by bookmakers who were concerned about the amount of bets placed on Campbell to win the one-frame shoot-out, which ended in a 32-21 victory to the Scot.

The matter has been passed on to David Douglas, head of the WPBSA's integrity unit, for a thorough and immediate investigation.

WPBSA chairman Jason Ferguson said: "We take the threat of corrupt activity very seriously and we are treating this matter with the utmost urgency.

"Having set up the integrity unit last year, we have the mechanisms in place to make a full investigation."

I actually picked this up live, each match is one frame - so most (not all obviously) have been 1.9 - 2.1 or thereabouts, Ronnie O'Sullivan started at 1.69 for example. This lesser known fellow rocks up starts at 1.5! And for the amounts matched on each game there was a fair amount placed in relative terms, most bookies pulled the market after Campbell was backed from 5/6 to 2/5. Obviously people would have to watch the match themselves to form an opinion, but Michie missed some seriously, seriously, seriously easy shots IMO.

Like I said, I copped this live so have the screen shot of the graph, he goes from the "normal" price of evens-ish to under 1.5 pre-match, people take on the price just before it starts because every game has been priced closely - so 1.5ish seemed a fantastic lay, price goes to 1.6 but then crashes to 1.5 again as the players are walking out, which also claim the biggest spike in volume. The price spikes are when Michie "got in" but then proceeded to miss badly.

In relative terms to the markets (and you can watch them this afternoon too), €109k out of €118k, even discounting the bookie gamble, is a massive amount, with basically nothing traded on Michie.

To compare, and I know this is pre-off and without in running money obviously, Shaun Murphys game today €1,467 has been matched, and he is 1.72 and a previous World Champion. In the winner market for the whole tournament, there has been €16,361 matched. Neil Robertson (1.67), another World Champion, has a game starting in 15 minutes and €3,458 has been matched. I didnt think Campbell v Michie would be the star attraction of the week..! 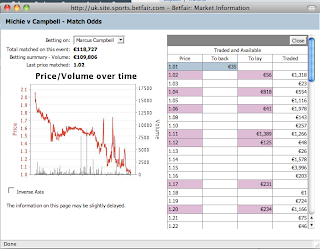