A win of €14.40 this week, hurrah! It beats losing anyway. Its nice to get January over and steady the ship. Most things have still been a struggle but better than the previous three weeks, Eng were useless this morning, 145/9 - just terrible, if that happened last week I'd have lost plenty but having seen how bad theyve been this series I'm sort of almost expecting it by now and got away with a €13 loss, play properly and they win IMO, but I've said that at least three games so far and theyve lost them all. Funny how the team who lose The Ashes always do well in the ODI series after, personally I wouldnt read too much into this for the WC.

To follow on from the last post, Jimmy Michie has announced his retirement from snooker..! What an odd set of circumstances FFS. Marcus Campbell then made it to the semi finals in the end. Hopefully the investigation is done properly anyway, I have another screen shot from all the matches on Saturday afternoon, shows how strange the 1.5 was, even the big names were only 8/11, in fairness to the bookies they did open at 5/6 and sure how were they supposed to know what was coming. 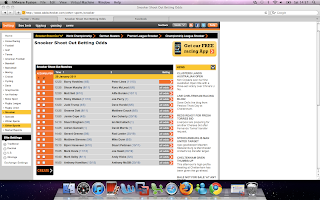 That game aside, it has been a fantastic tournament for snooker, and can only help the game IMO. Alright, once/twice a year is enough, but Mark King said when interviewed "its a much better buzz to play in front of 1,000 shouting people than the normal quiet 20 or so on tour." Obviously when you change things you 'offend' (I use offend loosely) people who like the old game, but I'd rather offend the 20 people and have the new 1,000 people than stick with the people who hate change. For betting, it is the new crack cocaine, and Friday night/Saturday morning it was free money, market has somewhat copped on this evening and its been harder, although maybe that was just me losing.. dont know much about all the players so aimed to win a fiver/tenner off each game and sure Friday night, because it was new and no one knew what to do, you couldnt really lose just trading on numbers.

Speaking of offending people, Andy Gray and Richard Keys, what are we gonna do with them. Obviously they were wrong, and obviously sacking them was the way to go given the videos that came out after the offside one. However, a bit of realism, far FAR worse things happen in the world, like this fellow for example, who locked his wife in a cellar for 16 years, hes not on every news channel/news paper going. The whole sexism issue seems very clouded to me though, and theres an awful lot of double standards, I dont read much on the issue but I've never heard of a man complaining of sexism - and theres a lot of bad things said about men in womens TV shows, magazines and shows like Sex In The City/Desperate Housewives, then it all kicks off when a man says something bad, I dont know, obviously its wrong but the furore over it is unbelievable. Anyway, isnt it great to see Sky Sports tackle sexism, yep, its fantastic. Now, whos this weeks soccerette again? Er, yeah.

On a personal note, and living in my gambling bubble, I'm a bit annoyed they got sacked because they were good at the job and watchable. Like I said countless times before, what sportsmen and other people do in their own time is their own business and none of mine, and I thought they were quite good on the TV while I was watching/gambling. My opinion would be, one woman should be 'offended,' the lines-lady, and it is no one elses business because it does not involve them, simple as that. But having said that, 99.9999999% of the stuff reported on the news has absolutely nothing to do with most people but that doesnt stop them getting all worked up over it. Its like the current situation in Egypt, of course its bad, but unless you live there it makes fook all difference to our life here what happens there. So Andy Gray is a bit sexist, Tiger Woods likes a ride, John Terrys a twat, Wayne Rooney rides grannies, Ashely Cole is daft for cheating on Cheryl, Katie Price is a bit of a slapper and Andy Murray is Scottish again after losing, does any of it change my life, no. Celebrities eh..

Anyway, Tiger came back this week, always adds to watching the golf doesnt he, I'm still of the opinion he cant be backed until he actually wins again. But, he REALLY has to stop seething after hitting a bad shot, I think he dropped three in five holes Friday night and he was effing and blinding, throwing clubs, whacking them off the ground, shouting fuck at the top of his voice (which was very funny at the time!), its a fact he cannot be operating 100% if hes seething, like anything. He wont come near to winning until he stops, I'd love to actually sit down and tell him hes a fooking eejit and just calm down, we all know the chances of that happening..! But seething will get him no where in life, and he still has major mental questions to answer IMO. Alright I'll say it, dont hold me to it, but the great man, unless he stops the seething, is FINNISH. That comment should at least give him the grand slam of majors in 2011 anyway, 80/1! Being serious I'd rather back 10/11 he gets none (I havent though). 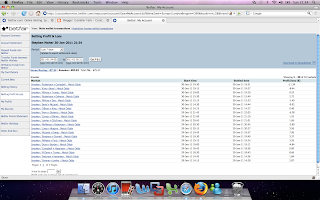 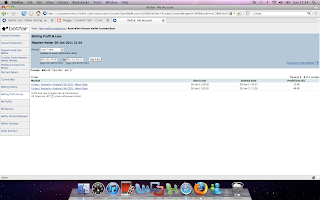