Seems so long ago since the transfer window closed on Monday, Torres 50M, Carroll 35M, apparently bidding 14M for that Blackpool fellow Adams, footballs gone mad. I was just thinking though, good business deals - like say Van Der Vaart for 8M - are becoming a rarity these days, youre better of putting no pass on it almost because none of it makes sense at this stage, Carrol for 35M is obviously insane but its their money I suppose. In fairness we were all glued to Liverpool-Chelsea this evening, cant complain we all still watch it, Liverpool done United and Arsenal a massive favour there though (I was gonna say done the big clubs a massive favour just to wind them up but sure thats too easy, too easy).

The biggest football news this week however is Gary Neville retiring, I think someone said he wants the job at Sky? Lets face facts here, hes a small, angry at the world, self-obsessed, bias United fan. Pundit? Surely he'd be much more suited to refereeing. Myself and the lads done an accumulator, like every weekend, normally get a few wrong - this week one team let us down. You know who it is, I dont even have to say it. Arsenal. FFS. At half time "Sure City are 3-0 up and Arsenal 4-0 so those games are in anyway.." Thats what I get for laughing at Newcastle fans all those times they said they were gonna finish top 4.

Anyway, January has finally ended and I've managed to win! Yes win, amazing scenes! Plus €150 this week and felt a million dollars on Tuesday ending up €100+ awe-green, for the first time in weeks, forgot the buzz of winning. The thing I'm most happy about is I went four weeks not doing a thing correctly and only managed to lose €275ish and then can win more than 50% of that back in just one week, happy I didnt do anything daft while things were bad you know. Tuesday anyway, Aus-Eng bounced around the whole game nearly and thankfully was right a few times instead of being wrong, always favoured Aus because of Engs bowling though, so that helped. 6-1 seems like a proper beating but they'll be a completely different side in the WC, Swann will be back anyway and hes obviously the best bowler. I was trying to think this morning who'll open, Bell instead of Prior? I dont want to drop Colly for his bowling so have to pick between Bell and Prior to open really, Morgan now has a broken finger though, HUGE loss if hes not fit, IMO he'll win you at least one game by himself, but if hes not fit I was thinking of bringing back Cook, so he could open and that solves that problem - I know hes not even in the squad, but he was basically 'the man' on the tour of Bangladesh and is coming off a fantastic Ashes series - this is only if Morgan is injured now, I'd really favour not dropping Colly because they'll need him if Anderson or Bresnan start to go around the park. And its obvious from the series against Aus the second string bowlers arent much good.

I'd have, Strauss, Bell, Trott, KP, Morgan, Colly, Prior, Swann, Bresnan (if Broad is fit I'd rather him), Yardy and Anderson. Problem with that is, Anderson and Bresnan are open to go for runs on subcontinent wickets, Strauss and Bell arent *really* explosive openers (compared to Sehwag, Watson, Gayle, etc), KP and Colly need runs and Morgan has a broken finger, so its all starting to look dodgy. But sure feck it, Ireland are certainties to win the whole thing anyway.

I've been incredibly lucky to miss the site crashes this week too, I was busy early Saturday afternoon and the weather (how bad has it been this week FFS!) meant I was late getting back and missed the first half Ireland-Italy when it first went down. And then was all ready to do the boxing last night, and was persuaded to lie down on the couch and watch a film instead, and it crashed again. The whole site was down Sunday night to Monday afternoon for an upgrade - these upgrades are great arent they..! Reading the forum, the 1.2 shot in the boxing traded odds against on Betdaq, and Ireland were 1.18ish I think and traded 4+ too. These things happen, but I cant remember the last crash before the "upgrade?" Then twice on the first busy day AFTER they do it. I have also discovered the most annoying screen on the internet ever.. unbelievably annoying, you have to sign out and sign back in when it happens too FFS, seething. 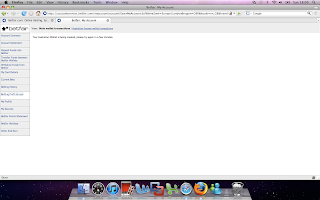 Six Nations looks wide open this year though, I thought England were crap(ish), but Wales were more crap. And Ireland were absolutely terrible. France fairly impressive scoring but not great defending, plus theyre fairly flaky and have to play Ireland and England away this year, they should beat us though really, not sure about England. Hard to have a strong opinion but I suppose the fact England have France in Twickenham might just give it to them. England could be going for the Grand Slam against us at The Aviva last weekend.

I've traded the games pretty OK, Ireland game was a bit lucky because I only backed them small when Italy scored the try, I'd have been in bother had I got home sooner. One regret was not going equal green on Wales-England, split second decision to let it go and sure Wales were 60s-100s less than a minute later. They never looked like winning and when I backed them it was for a trade not a straight bet so why I didnt go equal I've no idea, stupid (easy to say in hindsight mind).

And sad to see Leopardstown lose their Gold Cup meeting today, add that to losing Stephens Day and the day after that, must have a serious impact on their finances this year. You never get the same crowds turning up when its rescheduled, and both biggest days of the year gone south. Gives a betting day next week though because looking at www.livesportontv.com/ theres not that much on all week (that I'd be betting on anyway). I wont be around next weekend either, if anyone decides to check in no need to bother, Valentines weekend so one must build up credits so I can watch cricket at all sorts of wonderful hours during the year. I was actually joking the other night when Sky Atlantic was lunched saying that we may never leave the house again, they have 24, Prison Break, and now started watching Boardwalk Empire, they have everything.. but looking at the fixture list for the WC its a serious possibility I actually indeed may never leave the house again, and the IPL starts a few days after that - at least that starts at 12ish though, WC - 4AM and second game at 9AM, head in hands man, I was just thinking after this morning that was the end of the Aus wallet and early mornings, not so..

Back blogging on the 20th. 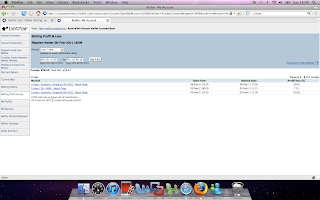 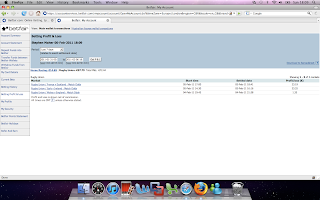