I'm happy out this weekend, its the simple things:

I bought an office desk and chair, I've been wanting a proper gambling place for bloody ages but decided to wait until the sales after Christmas to get a good comfortable executive type chair - never understood people spending lots of money on a TV setup and then spending very little on a couch - comfort is everything. Anyway, I was reading a thread on the forum there before The Ashes about what people do while theyre gambling, all sorts of weird and wonderful ways, some stand up, some lie down, one listened to the TV in the sitting room and bet on the kitchen table (theres always one eh!), some had offices and some, myself included, were couch people. We have a fireplace in the middle of the sitting room here, like most Irish houses, so the TV has to be placed to one side and rules out it being on the wall, I used to lean over to my left so I'd have the laptop and TV in the same line of sight, were here three years now (I think) and only recently I've been starting to get real pains in my shoulder after a longish session. So the desk and chair solves that problem.

I also bought a netbook while away, I was thinking - every time I want to check something, say the run chase in Excel, I have to minimize the market, especially when on a Mac because youve to switch from Gruss on windows back to Excel on Mac (VMware Fusion is amazing btw, lets you run both parallel, highly recommend), anyway I cant check Excel/Cricinfo/etc without leaving the market screen - I know the market wont move an awful lot most times but I'd say 2 or 3 ticks could build up over time, without me even knowing about it. Netbooks are cheap enough anyway and I brought it down to the lads in Dublin to change it from 1GB to 2GB so its able to cope with more things faster, it should compliment the Mac well you know. And I read a lot about the two-screen trading and it seems to work well for their needs, I'd have different needs because of so many applications open rather than just Betfair but it'll definitely help. And I know its around two years ago now but putting a TV at the end of the bed the same size as the one downstairs has proved an ultra shrewd decision with WC games starting at half 8 - watch the first innings in bed, gamble at my desk for the second innings, life is wonderful!

I have no reason to lose now anyway bar myself being a gobshite. I didnt think it before I actually sat down but it is nice to have your own space purely for gambling and can leave everything as is untouched. Far better than using a space which has to be used for something else too. Its the simple things in life.

Alas, I havent won any money yet (you were waiting for me to say that werent you). I actually won €5.74 in the last two weeks, I am in clover. Cricket WC isnt much fun for the first few weeks with the minnows involved, Kenya only managed 69 runs today, Canada were brutal but at least got to treble figures with 122. Tomorrow, Australia are 1.03, Tuesday England are 1.04, and Wednesday Pakistan are 1.06. Oh joy. I'm not a massive runs player so just have to wait around for some action in the win market, obviously not backing in the 1.0x's.

I do have outright bets though..
India most tournament 6s at 11/4.
Stuart Broad top England wicket taker at 4/1.
Kumar Sangakkara top wicket-keeper run scorer at 3/1.
Harbhajan Singh top bowler out of the spinners at 7/2 (field of 8 with Lads, think its called 'turn and burn' if I remember correctly).
Misbah Ul-Haq 4/6 to out score Paul Collingwood (11/10).

Not big on anything but fairly sweet on India, Broad and Sangakkara after today. Harby only took one wicket first game but Murali didnt bowl well today IMO - although he did take two wickets, I dont fancy Swann coming back from injury and could miss some games, I really think Broad should be no more than 9/4ish top England bowler. No innings 400+ at 10/11 looked alright too but the minnows have scared me away from that bet, dont think anyone will get 400 but over the whole tournament worrying about 10/11 isnt worth it really, India went close enough first game that you'd have been slightly nervy at some points, thing about that bet is you can easily trade because 400 at the start of any innings should be a fairly juicy price, but the problem is *when* to cover, think 400+ hit 3 on Betfair first game, 375 was gubbed at 1.03 too.

I'm cricket mad this weather anyway, WC goes until the 2nd April and then the IPL starts and goes to the 28th May. I look forward to leaving the house again on the 29th of May. Its actually my birthday then first week in June and the kind folks at Epsom are always nice enough to put on the Derby that weekend so everyone can celebrate. If anyone rings for lunch now "Yeah, er, I'm free.. hows August for you?"

In other fantastic news, The Rock is back! What a champ. What a hero. The crowd when his music comes on is unreal (pity JR wasnt commentating). Childhood = RELIVED! They'll never ever replace the Attitude Era, just another thing the PC Brigade has ruined saying you cant do this, you cant say that. FFS I used to get up every single Saturday and Sunday morning and watch it when I was a kid, and sure I turned out alright didnt I? I havent handed someone a beer and then gave them a Stone Cold Stunner in weeks.. (Steve Austin, theres another champ, what a man). 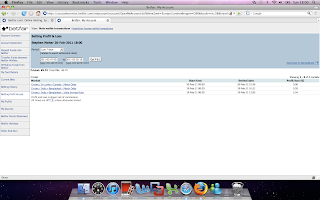