Well, pretty boring week in the cricket, Ireland only beat England setting a world record chase for WC cricket, Kevin O'Brien set the world record for the fastest 100 in WC cricket and only €3.2M busto at 1.01, you know, nothin' major. Shhure were a great bunch of lads. Suddenly cricket is cool on Facebook! I cant wait now to see all the exciting status' when Lancashire play Hampshire in the Pro40 during the summer.

I know I've went on about this subject in the past but surely cricket is one of the worst sports around to back in the 1.0x's? Darts and tennis are probably up there too. I know theres an argument "well I'd back 1.07 if I made it 1.02" but the fact it bounces around makes it very unappealing (to me anyway). I'd probably back in the 1.1x's but never 1.0x unless thats where I started laying, I suppose everyone is different.. people often say they dont back odds on on the Betfair forum and I think theyre insane but each to their own. It comes down to return really doesnt it, putting €300 on at 1.01 isnt worth the stress IMO because I can make do without the €3 as I have the €300, putting €300 on at 1.5 returns €150 though which is fair enough if it wins and you make it 1.3 or so. Theres no right or wrong argument, just personal preference - if I had someone to my right saying "I dont back odds on" I'd look at him as if he was barking mad, and if I had someone on my left saying "I only back 1.02s" I'd look at him as if he was barking mad as well.. 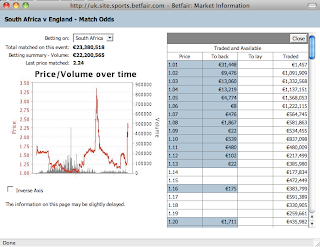 I'm sort of an in between person, if I thought something was short but would win, I wouldnt lay it (I'd rather have no bet), whereas other people would work purely on figures and numbers, I wouldnt like laying something I thought was gonna win anyway. Funnily enough I lost money in one of these situations on Thursday Canada v Pakistan, I thought Pak should have been easily 1.7+ but the market held them around 1.6 - knowing Pak would win in the end really, I had laid 1.3 and thought I'm not greening out at those odds FFS only to watch Pak then win (as was the most likely result anyway). The trouble about bias markets is when you lay 10 ticks shorter than it "should" be (I say should as in your opinion) you probably have to green out 10 ticks shorter too because the market bias wont have changed, your opinion on those 10 ticks wouldnt have changed either though, catch-22 isnt it? The market is "wrong" but at some stage you have to swallow your pride, bias markets are usually bias for a reason anyway as its a super-power v a minnow.

At least I have one good market this week, Ireland.. :)

I wouldnt mind I went for a jog and shower during our innings, they were getting hammered sure, and when I came back England were still 1.02, I wasnt even gonna watch but luckily enough now there wasnt anyone good looking on Sky Sports News at the time or it could have been all different. Its fair to say though I am blessed, Betfair went down on Thursday for a while and I had no position, the power went to the house on Saturday and I had no position - I know saying this means I'll probably have €200 odd exposure next time and lose. Having no electricity is no craic by the way, no TV, no internet, no computer, no cooker, no shower, FFS those African lads they show on the ads must be fierce bored on a Saturday afternoon.

I'm still losing on the lower odds markets, but again same as last week just the odd tenner on each game. I suppose theres ways of looking at it, the one time the minnow won I got €180 so losing a tenner when the favs win seems alright. Seriously though, how did Ireland not beat Bangladesh watching them against England and India? Threw it away FFS.

Into the future, and I'm not heading to Cheltenham this year. Ah, I havent the same buzz from racing this year as in past so not really pushed on going. The money is probably better off being spent on something I'd be really buzzing about going to rather than be 50/50 you know, or the way things are in Ireland probably the best option is saving it. To be honest, I couldnt name one horse in the Supreme this year, not one, whats happened to me!? Its a weird feeling because people still talk to me about racing and I feel so lost standing there, and before I'd know or at least heard about everything and be able to have confidence in what I'm saying but now not at all. I have to be careful too because obviously not everyone knows how much I've changed towards it, and as everyone who bets knows you have everyone youve ever known asking for tips Cheltenham week that dont normally bet, I remember two years ago I was there to anyone that would listen "back Go Native, back Go Native, back Go Native" whereas now, I'm afraid to say anything because sure I'm in no position to give a worthy opinion, they bet once a year, I bet everyday, so youre going to influence them in some way, and I'm in no position to.

I'm fairly happy with the decision not to go anyway, I'll miss the banter on the nights out etc, but for the amount of money I should be getting the buzz when theyre jumping the last and its not there. It'll be my first time not going since my Grandad first took me in 2002, end of an era, hes delighted though because he hasnt gone for the last few years and I said I'll go to his to watch all the races with him so that should be good.

I still cant any find any prices on the Government bar PPs, although they only signed the agreement today I believe so maybe we'll have more. I know I've probably been a bit harsh giving them stick before they even started, but I hope the Govern better than they drive anyway.. was it the five point plan or the five step plan? 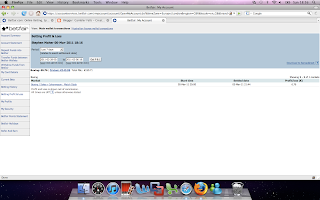