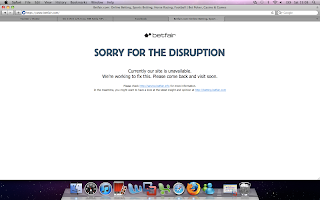 I'll save everyone the rant, sure you all know how bad the site has been this week. In fact, I think that statement is worse than actually having to explain how bad they are - everyone already knows.

Because of my style, the outages arent the end of the world, but someone whos trading off a stop loss rather than a max liability is completely fecked though. I'm sure everyone uses internet banking in some shape or form, I practically use it every day, and its been down once in all my time with an account, once! Betfair has been crashing once a day this weekend FFS. Unacceptable from such a big company with peoples money on the line.

Speaking of online banking, I now have exactly €4 in my laser account for this week. Finnish? No, transfered - its to stop me having any pre-off bets on Cheltenham. I have good discipline generally but I know theres gonna be one or two next week where I'll be going "well, its worth 20 quid.." No, no it isnt worth 20 quid. So that solves that. I havent studied any form whatsoever, I was looking at the markets on Betfair today, in the Arkle - I've only ever seen two horses race, Realt Dubh and Mikael Dhaguenet, never even heard of the rest of them. I'll probably get a good bit of stick this week, but I'm not a sap you know - my loyalty lies with money, not racing, and it has become unprofitable last year so thats it really. I'd be a mug to keep betting on something and lose just for the "love" of it, I'll have some sort of dash at in-running to see what the story is and that'll be it.

Anyway, onto my stressful Saturday, I was lucky in the sense that when we crashed, the market was exactly where I had laid at the time and I had Kallis and Amla there (if you could pick two cricketers they'd be high on the list to have in such events), so I wasnt *too* bothered initially..

Then, it comes back for two balls, settles at around 1.6 and I'm just thinking what to do, then goes again.. next ball? Wicket. The poor new desk got his first punch god love him (and I'm normally a very calm person!). Checked oddschecker to see India at 30/100 - 2/7 and thought FFS not depositing €500 into a bookies for 2/7 and decided to hold tight. The site never came back after that, but Saffers won, so I was happy-ish in the end, stressful but alright. If it was a bookies I'd be screaming "Feck you! Get in!" but its Betfair so theres no one to scream at. Horrible watching it though, especially when it went after the wicket, but I suppose the max liability style suits over a stop loss - green point.

I dont have any facts, just my feeling, but Betfair has always been bad in the run up to Cheltenham. Always seem to recall at least one crash the week or so before Cheltenham, I'd be of the opinion that it'll be fine for the big event, and theyve been fiddling around the servers lately to gear up for it (just my view no facts). They also moved offshore this week so that might have something to do with it - "Any further use of our site, or services relating to it, will constitute acceptance of the new Terms and Conditions by you. This change means that from the above time, you will be contracting with a licensed betting operator (TSE (Gibraltar) LP) within the Betfair group which is based in Gibraltar, and not Betfair Ltd, as was the case before. TSE (Gibraltar) LP’s activities will be governed by Gibraltar gambling regulations." Lucky they dont have to pay much tax anymore because they'll need the extra cash with all these crashes!

Looking forward to events next week anyway to see what happens, my money is on no crash but we'll see. 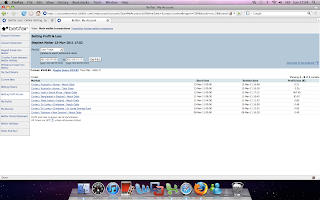