Well, its been a steady week without much happening, the only amazing scenes (well, actually not amazing scenes, Saffers always choke dont they!) was Saffers collapsing and 1.07 being busted in the process.. 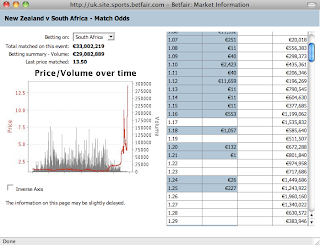 I said last week they were prone to a choke but jesus that took the biscuit, the run out for ABdeV was really sheer rabbit in headlights stuff. Other than that I got the other three quarters right but didnt really make much money, India were short enough the whole time against Aus, Sri Lanka ended up a 1.01 train against England and Windies collapsed against Pakistan.

The good news for my outright bets is Misbah has beaten Collyingwood and Sangakkara is 120 runs ahead of any wicketkeeper left. And sightly bad news is India are 7 sixes behind New Zealand.. I didnt see New Zealand getting past the quarters (whoever they played) and possibly a little unlucky because they were involved in the Pakistan game were they got 100 odd or something crazy like that in the powerplay and hit 13 sixes alone in that game FFS, 11/4 was a fair price and I knew plenty of shrewd people backing it so no real complaints, cant see India catching them but it'd be a nice surprise if they did. Obviously Broad went home injured so thats busto, feel very unlucky there, he had 6 wickets when injured and Swann ended up with 12 having played four more games - that would have been mighty close IMO. And the Harby bet is down too, he has no chance of winning. They come out +€50 if all stays the same, if India can get up that changes to +€800 - so just a little swing there..! India have absolutely no chance whatsoever though (hopefully that jinx does it).

Its not been an enjoyable week gambling really, yesterday I hit the wall - was asleep like a baby on the couch at three in the afternoon (that was after having to walk away from the laptop during the game too FFS), 30+ days of 50 over cricket takes its toll, and I've been planning my life around the games, picking and choosing times to do other stuff and not interfere etc. I'll be glad now when its over, although we have more breaks now so its OK I suppose, in all likelihood such volume of 50 over cricket wont happen again (theyve changed the rules for the next WC havent they) so I dont need to change anything in my approach. Thank god today was a blank day and tomorrow is blank too before the semis on Tuesday, I'm nackered, I cant remember a time since starting the blog I've been this tired from trading. Time off is important!

But we'll all struggle on until next week.. "Youre never a loser until you quit trying." - Mike Ditka. The P&L while the WC has been on stands at +€1k, thats around the mark I had in mind at the start and am happy considering most of the games involved with minnows had SPs sub 1.1. 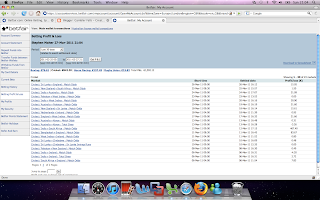 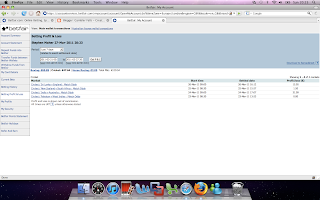