Youre in the running for the Premiership, you score a goal in the 98th minute to put yourself ahead, the stadium goes wild with uncontrollable joy, but then, in an unexpected twist, you give away a penalty in the 101st minute to draw, at home. Yes, thats right, it would only happen to Arsenal.. 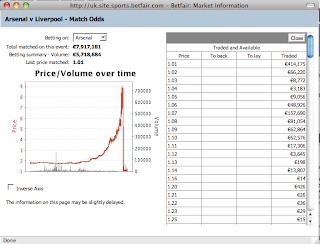 They have less bottle than Rory McIlory, although I did feel sorry for him last weekend, he was three shots ahead at some stage this weekend and ended up finishing third (in a far easier field), dont really want to call him a bottler but you surely have to give him the timeform squiggle, as soon as hes put under pressure his putting is nearly as bad as my good friend Mr Doyle.

I missed the Khan fiasco last night, but after reading the in-running thread on Betfair decided to watch it this morning. What a mountain made out of a molehill! Now, obviously the fight shouldnt have been stopped, but Khan won the six rounds (and on all three judges scorecards too) and was bossing the fight. The cries of dodgy ref are a bit over the top to say the least - its not like he was getting hammered and they thought 'oh quick lets get him out of there' he was clearly going to win anyway. McCloskeys corner had every right to be seething I suppose but in the grand scheme of things Khan was winning easily and I assume he was in the 1.0x's when it happened. Khan being a bit of a twat will always make things worse than they seem, but if McCloskey gets a rematch from his moaning and crowing he'll be doing VERY well for himself. It'll be a pointless rematch too.

Anyway, I found my bogey team for the IPL4 in the shape of RCB, minus €350 on their games this week, no real excuses apart from them being a big bunch of useless gobshites really. Ah no, I laid and they lost wickets - unluckily (for me) I like AB de Villiers and Virat Kohli, so I'll support them more times than not so didnt red out when I should have done, the rest of the team leave a lot to be desired though, I should know better. In hindsight, on their second game the correct move was to red out and save €70 but I'm strongly against backing sub 1.2 in IPL so I decided to just leave it and roll the dice, didnt work, but IMO you'd be a serious loser (probably be dead by this stage from heart attacks!) to back sub 1.2 over the past four years so I'll just get on with it.

Apart from RCB games, the markets have been OK, at one stage I was plus €450 for the week but finish with €337, I'm still sticking with the 'pick the winner' tactic rather than going equal green, its won me money this week and its the way I like doing things anyway so I'll continue - getting rid of red remains the main priority though. I missed todays games because ITV decided to show some crap touring car race instead FFS. I know there is some ill-feeling towards Sky (for whatever reason) but they really are absolutely top notch for covering sporting events and when theyre in charge and not relying on picking up the feed you never miss a moment and the time delay is minimal, theyre worth every cent IMO, life would be boring without sport anyway and without them we'd see an awful lot less. 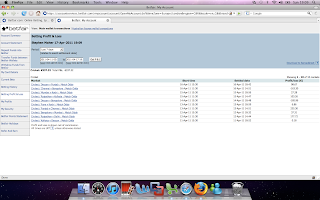