Its Weird, In America..

I havent been following this story at all, apparently its been going on since 2006, however, the Americans crusade against online gambling strikes me as, well, a bit mad:

The founders of the three largest online poker sites were indicted on Friday in what could serve as a death blow to a thriving industry.

Eleven executives at PokerStars, Full Tilt Poker, Absolute Poker and a number of their affiliates were charged with bank fraud and money laundering in an indictment unsealed in a Manhattan court. Two of the defendants were arrested on Friday morning in Utah and Nevada. Federal agents are searching for the others.

Prosecutors are seeking to immediately shut down the sites and to eventually send the executives to jail and to recover $3 billion from the companies. By Friday afternoon Full Tilt Poker’s site displayed a message explaining that “this domain name has been seized by the F.B.I. pursuant to an Arrest Warrant.”

The online gambling industry has taken off over the last decade, drawing an estimated 15 million Americans to bet online.

In 2006 Congress passed a law curtailing online gambling. Most of the leading sites found ways to work around the law, but prosecutors allege that in doing so they broke the law.

“These defendants concocted an elaborate criminal fraud scheme, alternately tricking some U.S. banks and effectively bribing others to assure the continued flow of billions in illegal gambling profits,” Preet Bharara, the U.S. attorney in Manhattan, said in a statement.

Poker fans took to Twitter in droves, worried about the money in their online gaming accounts, fretting that online poker's days were at an end.

"Well the good news is I think I only had about $300 left on the online poker sites overall," tweeted Jimi Schindler of Madison, Wis. "Maybe I'll see that money?!!?"

I suppose now is as good a time as any to appreciate that we live in a fairly "normal" part of the world towards gambling, the Australians dont let you bet in running, the French block Betfair, and now the Americans are going all FBI on poker. Cant wait for the movie to come out, Denzel Washington gonna play head FBI agent IMO, except in an unexpected twist Phil Ivey and Tom Dwan are gonna team together and run over the FBI and bring poker back.. well has anyone got a better idea..!? 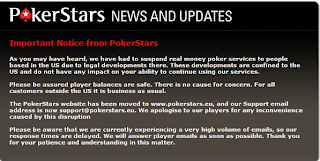