Have to say I enjoyed Monday-Thursday off this week as planned and am raring to go for the IPL, hard to believe it doesnt finish until the 28th of May, thats literally miles away - imagine if Cheltenham went on that long. I was thinking of a 'goal' (sort of goal) to average a certain amount over the matches, €10 a match is €700, €50 a match is €3.5k etc, but I bloody hate targets and stuff like that, so I'll just get on with each game and play it as it is - days like today would present massive problems for having 'goals' because first game innings SP was 1.02 and second game was 1.06 (I think, went to Leopardstown instead). Some days its just impossible to win so having 'goals' will only lead to going hunting for something that isnt there, its probably going to be my biggest test of discipline in ages to sit through 70 odd games without getting involved in the first innings and waiting for the second - especially when the game might be effectively over be then like todays collapses.

Bit of a culture shock on Friday anyway going to the crazy moving T20 markets from the steady ODIs, still working out how to play it as I go along, green out equally or play to back the winner?

I had two books exactly the same but with different outcomes, I was late on the screen shot but they hit 1.16, without me greening out, ended up being wrong..

Then Saturday, it bounced around a few times from 1.4 to 1.9ish, held my nerve and they ended up winning..

I dont think theres any "right" way of doing things, its just personal preference. Its always annoying (after the event) to not win being in a good position but then when I'm right I win more by not going equal, so I'd back myself to be right more times than I'm wrong and sure go from there. The primary aim will always be to get rid of red anyway (if the odds allow). Friday, they needed 9 off 8, so maybe I'm over-thinking a greening tactic when in fact its just the teams being gobshites, 9 off 8 FFS. Its like this anyway - get rid of red and worry about the rest later. Theres so many games theres gonna be so many opportunities, coming back to the average if you were to win €30 every game thats €2.1k - one game in the grand scheme of things isnt going to make a difference if you keep the head.

Anybody brave enough to follow me on Twitter will know I've been backing Tiger this week, even though I've said numerous times he may never win again (howzzzaat for logic eh!), I've dumped after yesterdays round, I did have big green on him after Friday but cant see him winning now. I've had the remaining green on McIlroy - small bit afraid of the choke but he has a cushion now and the ones behind didnt really inspire yesterday so I think he can get it done. Hopefully he does anyway, because I had €100 cash on Tiger at 12s too which I never bothered laying off so Rory winning will at least get 70% of that back. I dont normally trade golf - was a serial loser first year on the blog on golf - so I'm not overly pushed what happens really, not losing €300 odd is an achievement I reckon..! 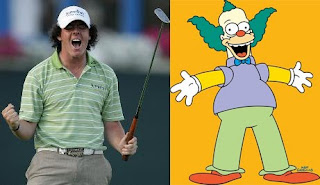 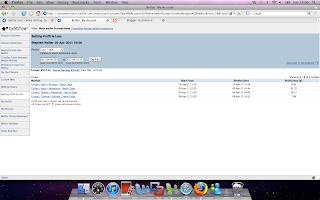