ITV decided to show touring cars again today instead of the IPL games so off to the golf course I went with the sun shining. Only when we got there noticed just how bad the wind was, and after an 8 (yes, eight) at the 1st I was stood there thinking "I wonder can you bet in-running on touring cars.." Stood on the 4th tee I managed to knock it straight over the 2nd green (dont ask) but somehow ended up on the 1st fairway with a perfect Tiger-esque view through trees straight to the green. Managed to finish +7, which is my worst round ever, the wind was ridiculous though (thats my excuse and I'm sticking to it!).

Anyway, much like the wind on the golf course - really struggling with the IPL pitches this week, theyve slowed down immensely and I'm finding it difficult to trade. Tuesday was the only ray of light +€250 which was won 7 down with 3 balls to go, I was in Fairyhouse on Monday and picked up €30ish there, so to be +€300 Tuesday evening with the whole week to go, kind of disappointed to "only" finish +€138 - but its better than losing, definitely.

I lost €70 on a match which looked "fixed" although it wasnt - horrible to think like that but some things being played out in front of you just leads to it. I tend to be of the opinion people screaming "fix" are sore losers, but obviously there are events which are indeed "fixed," maybe 1 out of 1,000 or whatever I dont know. I had backed the winning team, thought they werent trying (not a shot played in anger), switched, then they ended up eventually winning - so technically I was "right" in the first place but ended up losing money due to how they played it, what can you do though. And I lost €40 and €30 laying low odds - which seemed a good idea at the time but now I'm sat here thinking "Oh FFS why did you lay 1.08 for €500 why not €200 or something."

Happy enough in the main, its just with the pitches slowing down it tends to lead to lower odds for the defending side - which really doesnt work out for me, just a personal thing, obviously given the choice I always love to start the second innings with both teams around evens or within 20 ticks. 1.3s to defend a biggish score is never going to work for me because I'm never backing it (especially in IPL) and then will probably end up laying low odds after a wicket (like this week) and losing. I suppose thats one of the flaws of only betting second innings, but I think the past couple of days its just trying to get adjusted to the pitches and a rate thats acceptable to chase. And obviously the collapses, both innings, dont help.

Anyway, great week for horse racing with Nina winning the National over here, that got plenty of coverage, and how good was Frankel yesterday, wooosh! I kind of agree with Jim McGrath though, that style of running will hardly help him in the long run, basically he surely cant hare off like that if he runs in the Derby (although its looking unlikely, out to 16s on Betfair for Epsom as I type).. hes a very impressive horse and I dont want to say anything bad about him at all, I suppose theres no real negative about him if hes not going for the Derby, he can seemingly go as fast as he wants over a mile. And delighted to see Together finish 2nd today, I was raving about her last season and she made me look a mug many, many, many times but she turned out to be the best filly for the Guineas - which is what I was saying in the first place, sure whats running six times in between and not winning between friends anyway..! 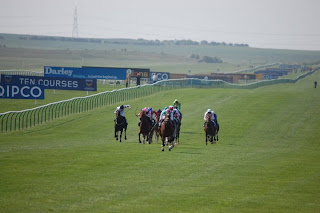 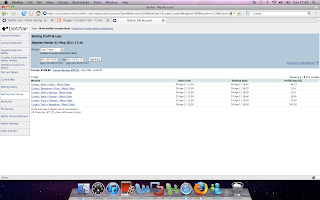