Quiet enough week on the gambling front in terms of volume, for no real reason other than I havent had a really strong opinion on anything. I skipped the IPL final to head into town for the Champions League yesterday, that worked out great, didnt it. Ah no, full credit to Barca, the best team won and no complaints - it was nice to see a few of the United players say vaguely the same thing on Twitter too, no point lying and sure there comes a time in life when you just have to hold your hands up and say too good. Barca were indeed too good.

Easy know where I get from laid back personality from anyway - my Dad rang me straight after the Rooney goal "What ya think?" Were gettin' feckin' hammered I'd take 1-1 now. "Ah we'll win, I wasnt worried when they scored knew we'd comeback." Wasnt feckin' worried? And I was the one drinking.

I was hoping Rooney wouldnt score, so then I could say that this has been the best thing hes done all week:

Banter! She has since put her tweets on private. That'll teach her.

Very boring few days at Cardiff for the 1st Test - probably lucky in the sense that we lost 42 overs before play had even begun so got a feel that it was going to be one of those things, but yeah its just been no craic watching. I did have a green position of €200ish but buggered it away laying the draw at 1.35 after day 2, then woke up to rain day 3 and sure that was that back to square one. Mistake laying overnight really, I cant control the weather though. On what I've seen so far, the Sri Lanka attack wont bowl out Eng twice, Jimmy Anderson injured is a massive blow though.. It'll be interesting to see if they bother declaring tomorrow - personally I'd bat all day and run the SL bowlers into the ground, next game comes up quick on Friday.

The strongest opinion (and position) I've had this week was on the IPL, although that was gubbed at 1.1, CSK managed to get 53 off the last three, head in hands. Not as bad as Mayo drawing with London today - London havent won a GAA Championship game since 1977 (I believe, radio said it), and with a draw they turned over a 1/100 SP! Has that ever happened before on GAA, seriously? I cant remember one. Dublin and Cork have certainly lost from 1.01 in running but a 1.01/1.02 SP? 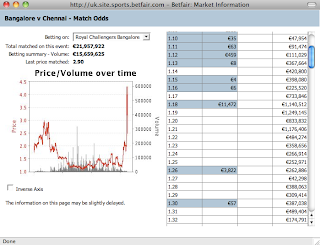 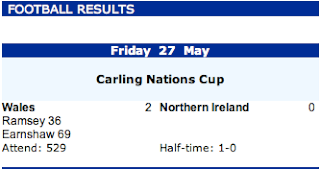 I had a fairly big accumulator bet settle on Friday too with Sachin finishing top Mumbai batsman, theres only one SJ shop in Dublin/Kildare and I wanted €500 on him but they would only give me €100, I had that on and then put the other €400 on through trebles and accumulators - possibly not the best way to approach things but through some miracle everything managed to win so I've decided to invest in a horse. It'll be my 3rd time involved in a horse, the last one had to be put down which was a bit sad so decided to lease one for two years this time around, leasing is grand and handy really theres no outlay just pay the training fees every month, I think theres 14 or so of us. Her name is Seesea and Henry De Bromhead is the trainer, last run was 5th in a listed bumper Navan so she'll be plenty of fun for two years and sure she might even win.

I'm 23 on Saturday so that'll bring me up to 25 and sure be near retirement age at that stage (not really!), as I said the last one I owned had to be put down early in his career (after finishing a nice 2nd in a bumper too) so the leasing seems a great option and hopefully I can have more luck with this one. Its all relative really, you have to have a hobby or something to do in life and some people spend their money on cars, some on holidays, some spend their whole life drinking and smoking, some spend all their money on children, whatever. Being a gambler naturally I want to spend my money on horses because thats what I get enjoyment out of, I'd never own a horse in England though with the prizemoney - although with syndicates its more the banter side of things thats the main thing really. Shame the TV is so far behind the on course boys for in-running these days but c'est la vie.

Hopefully Recital can win the Derby and give me a good present on Saturday! 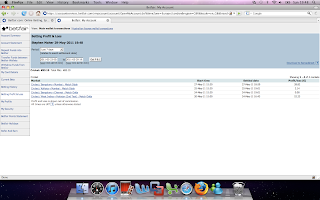