Well, a waste of a week with my Broadband going down on Wednesday night, needed to have a new box sent out so only arrived today, why do these things always happen to me over the weekend? I got 3+ years out of the old router so I suppose thats good going, and the new one was free anyway.

Gutted to miss the 2nd Test Windies v Pak, draw hit the 1.7s on day 1 - although I did think the pitch would be a bit flat - still missing out on a relatively very easy play compared with other avenues on Betfair, draw is 6 with two days left. 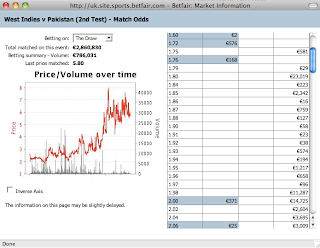 Anyway nothing I can do about that, with no internet we embraced the outside world, went to The Curragh on Saturday and then to Portlaoise for the Kildare game yesterday, won very handy and play Meath now in the Quarters of Leinster, my good friend Tomas is from Meath so obviously beating them is of VITAL importance! Then all things being equal we play Dublin in the Semis, it was a double header yesterday so caught the second half of Laois v Longford - Dublin should hammer Laois really. Kildare went the whole second half without even conceding a point until 3 minutes into stoppage time, I think we'll beat Meath and then not sure about Dublin it might be too soon, I'd say if it was the semi of the All Ireland they'd probably bottle it but semi of Leinster isnt as important. Last two seasons Kildare have lost the first game of the Championship so winning is improvement regardless, I actually think the back-door style of playing every weekend helps us so wont be overly bothered to lose in Leinster. Beating Dublin would be great though..! 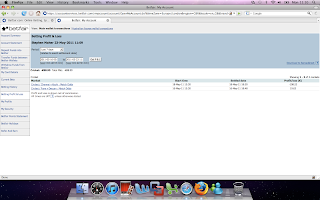