I know I'm a day early but the Test match wont finish until around 11 tonight and I'll be nackered, so going to stick all todays action into next week. I wouldnt say that many people are sat there on a Saturday afternoon at four thinking "feck me, cant wait for Monday," Test cricket is hard going.

I have my book squared atm because I literally have no idea whats going to happen tonight.

I think the India price is fair enough at 1.38, I'd have them 1.4 to back though rather than to lay but thats not a major difference. Windies are 81 ahead with 4 wickets left, couple of questions - 1) How many will they get? and 2) Will India chase it? IMO India might shut up shop if Windies set them 170ish with one and a bit sessions left, but thats asking the last 4 wickets to put on nearly 100, which I wouldnt say will happen however Chanderpaul is still there on 73. Get him in the first 5 overs later and its probably GSM India, 1.4 is fair enough - you'd expect India to win, although there maybe a few bumps along the way without an early wicket. If I had a strong opinion I'd have all my green on it but cant call it.

Apart from that its been a quiet enough week, I've been doing the Test since Wednesday so only had Monday and Tuesday really, I had this book on Monday night.. and ended up winning €2.

I never learn. Thats one thing I want to improve on, it suits me to have all my green on the outcome I fancy, but I should be able to see when things are going tits up better and do something about it. I'm strongly against going all green just for the sake of it though (and that 1.75 hit 1.25 after), it should be when the odds suggest going equal rather than just because you have green one side and nothing the other. Getting rid of red remains the main goal anyway sure.

Kildare won yesterday too! So onwards and upwards, hopefully we avoid Cork in the next round, think the draw is tonight I'm not sure. That was the best moment of the week, the worst moment was this email.. 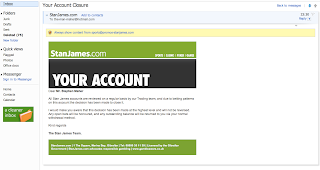 Funnily enough Ems signed into my email on Wednesday night and immediately said "What have you done now?" I havent done anything! I've had no account with Stan James since they closed my last one about two years ago, I'm presuming that email means I'm barred from Betpack and not Stan James, SJ own them (or oversee them or something) if I'm not mistaken. Betpack are made up of Bamburys, Hacketts, John Mulhollands, Terry Rogers, Pat Toolans, Track Bookmakers and Tullys so effectively I'm barred from all of them, great! And the last time I had a bet of three figures with them (€200)? March. The account was limited after mind, but still I havent done anything of major seriousness.

I love the way they say "due to betting patterns on this account the decision has been made to close it," using the words "batting patterns" is like something you see on Sky Sports News when crooked jockeys are being investigated.

The disappointment of that email has been made up by this email from my friend..

Ah man I was doing some temporary office work in down syndrome ireland in bluebell there. I sent an email after to the manager to thank them for the chance to work there.

Did the worst typo ever signing off and instead of 'kind regards' I typed 'kind retards' by mistake and sent it. Dam spell checker didn't stop it either!
Never got a response back to the email, they must have thought I was completely taking the piss!!

An update on my horse SeeSea too - after her first workout its been decided that her legs arent strong enough to stand up to the training of a racehorse so she wont have a future and has been packed off to stud. Thank god we leased her, given it was her first workout we dont even lose a months training fees which is great, and now were back to looking at unraced and unnamed bumper horses for the National Hunt season. I almost feel a bit sorry already for the poor horse were going to pick, given our luck and track record the poor bugger will almost definitely end up in a can. Leasing is a massive advantage though, I mean if you bought a horse and in her first canter back something went wrong you'd be gutted, however with leasing you just move on pretty quickly, sounds harsh but its the way it goes really. We deserve a winner after all weve been through! So far weve had two horses, one race (2nd), one dead and one retired. As I said, god help the next one. 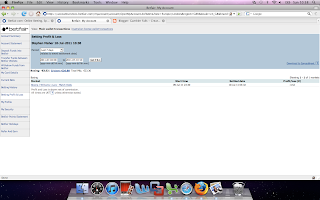