I use the word 'goal' because probably having 'targets' isnt a great idea in the general scheme of things, but everyone knows you have to reach a certain figure (or average it over a few years) to stay gambling, so its nice to pass the magic €7.5k online so early in the year.

When I started the blog it was March, so I went from March to March as my year, but when I dropped the laptop and needed a new hard drive (never check your emails after Coppers, lesson learned) I lost all the early figures so now go as normal January to December. I'm not sure on the numbers but I recall January and February being losing months (or ones of considerable struggle) in 2010, and this year I was sat on €30.2k at the end of December and then first week in March I had reached the grand total of €30.3k - that works out at winning on average €12.50 per week - er, its a long way off but for some reason I think booking a holiday next January/February is probably not the worst idea. For whatever reason I cant seem to do anything right those months, nor can I explain why.

On the plus side of that winning €50 short of €9k in four months and a week is promising for the future (I always envisioned having to quit gambling if I had children etc, you know yourself) but maintaining those figures would mean I could continue gambling, but obviously thats 10 odd years away so its not really important but anyway.

In the more immediate future - I would like another 'goal' to work towards to keep me focused. Just to keep myself from going mad, getting lazy, I have good discipline in general but its nice to have a "reason" for having good discipline and a bit of structure or rules. For example, I lost €230ish on Roscommon today, Roscommon are hardly a strong GAA team are they! And gambled on the golf all weekend, even though I know I'm bad (lost €12ish after being €175 green) and had €350 on Kildare last night - even though the odds were incredible, at one stage Meath brought it back to level and it was looking dicey (and adding that to my cash bets wasnt really an enjoyable number!), I havent lost €300+ on a Betfair market since January either so would like to keep that for as long as possible and not start doing daft things 'just because I can and it makes no real difference.'

The plan is to not change anything anyway, as always it if aint broke dont fix it, go for dinner tonight (been waiting for the golf to settle to post and I'm bloody starving!) and take a few days off before the Eng v India 1st Test and then decide what to do or where to go for the rest of the year.

By the way, the boxing on the P&L is the same from last week so doesnt count, and its the big day tomorrow with the new PC charges coming.. be interesting to see what effect (if any) it has on the site. 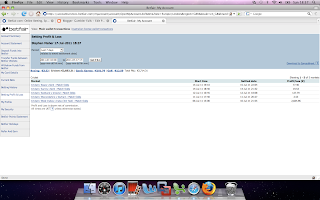