Its not been the greatest week in terms of enjoying sport but its been OK on Betfair.

The King George yesterday has got to be one of the most unsatisfactory races I've ever seen - between the false/slow early pace, poor Rewilding breaking down, Workforce hanging, St Nic letting the first two get first run (although wouldnt have changed the result), after looking forward to it so much it turned out to be a horrible race.

In terms of the J O'B ride on St Nic, now I'm not saying the result would have been different at all, but for the future - as seen at Chester and Epsom, a bit of hands and heels before pulling out the whip works much better for him. Yesterday coming round the bend Joseph was sat there looking cool and then when he went to say go the first thing he did was give him two cracks (and to be fair he responded) but at Chester and Epsom he was wound up gradually before hitting 5th gear and taking off. IMO he was rode yesterday as if he could go from 1st gear to 5th just by two cracks of the whip and a "lets go," he wont overtake Group 1 horses like that, you have to give him time. Anyway, it wouldnt have changed the result but if he heads to the Arc thats the way I'd like to see him rode - he took off towards the end of the race at Epsom having come under pressure a good bit out, he can make ground hands and heels, get into a rhythm, then whip him and he takes off. If ever there was a KF ride for the Arc its him.

I'm slightly secretly glad he didnt win though because when I was backing him for the Arc, he was 33/1 for the King George too. And I thought at the time (before he ran this season) that he would have all the 1M2F races open to him too, so would skip the KG. It only turned out after him running that you could see he was an out and out 1M4Fer.

And as if my heart wasnt broken enough by that race, Wexford a few hours later were 5pts ahead in the second half, 3pts ahead after one minute of added time and managed to somehow end up losing. I dont even know how, FFS. At least Kildare have got a good draw in the Quarter Finals against Donegal, then we could possibly meet Dublin in the semis, the other semi looks to be Kerry v Cork which should be a cracker, I'm probably a bit bias towards Kildare but if they turn out to be the semis IMO its the four best teams in the country at the moment and it'll be fantastic for the GAA. I'd love to see Tyrone beat Dublin though (presuming Tyrone beat Roscommon).

If the Wexford result wasnt a kick in the balls, this definitely was, handy green - only 20 balls to go for a result and get paid, oh wait look, its raining, void..

The same feckin' thing happened Monday as well! Both times I had CMM insurance but for only half of the green I had on the match odds, I hate the rain. I have no match odds results this week at all - only rain results.

Its been very hard work over on the 1st Eng v India Test too, the draw started day 1 at odds on and here we are after day 4, and its still odds on. Its bounced around a bit, today it looked like it was out with the washing but then came back in and gave me a bit of trouble. ATM my book is like this:

I'm happy to be equal green (because I havent got a feckin' clue whats going to happen tomorrow), but am a little bit disappointed even with that because a few hours earlier I had this:

I want that book back! Ah no, but that last two hours was a mare really I was all over the place. The draw coming back in has caused the main damage - I'm not sure if I'm giving the Eng attack too much respect, even though it'll be a day 5 pitch tomorrow it is Lords after all and a Lords day 5 pitch isnt a normal day 5 pitch. Not sure what will happen tomorrow - I know I dont want to be opposing The Wall and VVS though, will sit out of the market until one of them goes even if it means letting the draw reach 1.3 or something. It should be a good day whatever happens anyway.

I havent given much thought after passing the yearly goal last week either - I think I'll just go along steady and see what happens really, I'll re-assess that stance if things start going pear shaped. So far I havent done anything mad like buy a dancing monkey or invest in Irish banks so I'm not doing too bad. 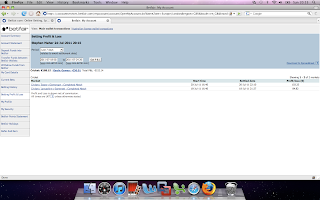