This draw price is some head-scratcher in the 2nd Test, theres two days left..

Er, we had 417 runs today - Eng are only 374 ahead, in theory India could chase that in a day, in theory obviously because Eng wont be declaring. I suppose the most likely scenario is Eng ahead by 500ish (or close enough to it) by lunch tomorrow and then India have to bat five sessions to win or draw. They'll hardly spend the guts of two days blocking, and if Eng bat for 25 overs at RR5 (its 4.36 atm) tomorrow, that leaves 155 overs - 500/155 = 3.22 which is hardly shut up shop stuff. Its hard to know whats the right or wrong price until Eng finish their innings I suppose. I'd have the draw bigger but at the same time wouldnt fancy India to chase 500 so where do you put them in at. Just on the time scale of things, if they last 155 overs you'd have to think they'd be close enough to the target anyway, at least seeing 417 runs in a day would make you think that anyway. Realistically if India do decide to block, you could see Engs bowling attack crawling all over them, you cant just block for five sessions. Wait until Eng post the score and go from there I suppose, in the end it'll be an Eng win more likely than not, but not without India "looking like winning" at some stage? The draw price is barking anyway, win or lose, funny thing is it'll probably go lower in the morning.

Anyway, I'm glad I have a good book on that because yesterday wasnt enjoyable with Kildare crashing out. 1pt up in added time, in extra time, and lose, FFS. They were 3pts down with less than 10 minutes to go before we went to extra time so I suppose cant complain too much, I thought we had it won in extra time though. Maybe its Dublins year after all? They'll surely find some way to bottle it though, could you picture Dublin winning an All Ireland, it'd be like, erm, Liverpool winning the Premiership. I did well yesterday anyway to limit the damage to under a tenner after having €244 at 1.7 Kildare, got a sense it was coming apart so ducked out, thank god for the Eircom wi-fi in Croker.

That was a tough five days, I'd have liked to have been more aggressive laying the draw but didnt have the bottle at the time, thats all really - that was the play, I knew it at the time too, but just didnt have the bottle. Its difficult (and its the same with this Test too), the odds are short but it just keeps coming and coming at you, draw backers are a relentless bunch. Even this match, surely backing 4.2 from this position cant leave you winning long term, and backing odds on on day one cant be a good idea either, just asking for trouble. But they keep coming at you non stop.

I had a few days off in between the Tests and its amazing how things change, I went for lunch and golf a couple of the days.. during Galway and Goodwood were all going for lunch and golf - that would have never happened a few years ago. Even the in-running edge with Galway being on RTE didnt attract me. Maybe were all just gettin' old. Or gettin' sense!

I didnt see any races live but Frankel was just awesome, what can you say about him.. he just has gears. And lots of them.. 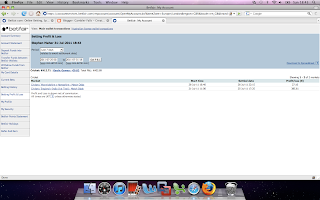