Going back to Monday, England were fierce impressive rolling over India - it didnt help me to be honest, I thought India would at least put up a bit more of a fight and gave away €500ish of green towards the end. Cant really complain, India all out for 150 odd wont happen too often IMO (although theyre in seriously bad shape this tour) and its just one of those things, in hindsight I was probably playing with fire because Eng were dominating the game but The Wall and VVS both got out to cracking deliveries, what can you do.

After that the week has been great, although I've been a bit lucky at times, yesterday I found myself in a possible €160 all red position - decided feck it and let it run, and it turned out OK in the end to finish +€126. Its probably not the greatest attitude to have but its where having a max liability instead of a stop loss comes into its own, it was a shite position, but I support my position and if I lose, I lose - it doesnt really matter because its only one max bet gone. Now, if I was sitting there looking at a €5k red I might be panicking a little and it WOULD be different then! But sure once I'm comfortable with stakes - and losing those stakes more importantly - nothing is the end of the world regardless of what happens so therefore nothing can really bother me, and being calm and in your comfort zone on Betfair is fairly vital you know. It works out OK.

Anyway, Twitter informs me that our friend, Mario Balotelli (I know everyone loves him really), left Wembley today in a gold puffa jacket, knee-length denim shorts with a diamond hem and a glittering-gold suitcase. What a hero. Hes also become a hit in America during the Summer, no doubt they all love him too sure how could you not, he has nearly 10 million views on Youtube now, but I dont think the American comms like him that much..

You can tell this season is already going to be great banter, I cant wait to see how many people he pisses off. However I would not suggest putting any sort of monetary faith in him whatsoever, best keep him on your side while getting people to seethe compared to seething yourself.

Lastly, after a solid two months of Test cricket between Windies v India and Eng v India I have decided its time to get fit again. Started off a new gym program on Friday + a new lean diet to go with it, it'll only last for 28 days to get the six pack going sure I'm only 12 stone now, so if you see me giving you the Roy Keane Seethe Eyes its not because I hate you, its because I want to eat you. Going from watching Test cricket all day and eating Chinese to going to the gym and eating green beans is like going from a photograph to its negative FFS. Anyway I'm not a quitter so I'll follow through with it for another 26 days before undoing it all over a single weekend when its finished. Healthy living, its only a phase, it'll pass.

The worst thing is these gym people who tell you "you'll feel better" thats a whole load of bollocks, waking up early hungry, walking down the stairs sideways because your legs hurt, not being able to sit down or stand back up without pain because your abs hurt does not compare whatsoever with waking up at half 10 hungover, having two paracetamol and a bacon toastie, sticking on the cricket at 10-50 and away we go.. you might die of a heart attack at 50, but you'd die happy, you'd die happy.. 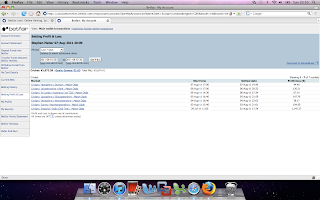