I cant decide whether England being number one in the world now instead of India is a good thing or a bad thing for the cricket markets. On the one hand, every England game is televised and it might bring in more interest now theyre the best in the world - on the other hand, India games tend to bring in a massive amount of money (especially for the draw). The Indian public will probably stay as keen as ever for cricket regardless because that seems to be the culture, and if we get more interest and money with England being number one, well then all the better. I dont think cricket markets are lacking any liquidity anyway - however India have been absolutely pap this tour, hopefully it isnt a sign for the future because keeping them as high profile as possible is great for the markets.

Anyway, skipped updating last night because the golf didnt finish until late. I backed Tiger (because its a major and I am obviously a major sucker), but was able to lay off when he was -3 through the first few holes before he had a complete meltdown - very sad to watch - if I could be any sportsman in the world I'd be him (in the sporting arena that is). So then, after going all green on him I proceeded to back McIlory, only for him to bugger up his wrist on the 3rd. Golf trading is fun isnt it! I ended up winning €7 - I wouldnt have picked the winner anyway, I hadnt even heard of him until last night. Not a clue.

The cricket has been much better, Australia traded at 1.07 Monday afternoon before collapsing to spin - I havent traded the ODIs but Ponting seems to be holding them together well since arriving.

That 5s to get 15 off the last with Cam White there was a great bet IMO, pity he got out the very next ball, but still it was worth it, market felt like it was one 6 away from a flip.

I dont like to use the word "easy" when it comes to Betfair but the Test this week, well it was easy. Back England, feet up, India are shite. I thought about not laying off, but you know regardless of any situation and odds theres never ever a mortgage job, and equally theres no point doing something different and unnatural from whats worked for so long, and sure nothing is ever certain in sport either. Just the attitude from the Indian players would lead you to believe they had given up, the price was extremely static around 1.2 - 1.25 for more than a day so that was my reason for not having red - I could see the lead coming but the market had already priced it in so basically the only way it could have gone was up and caused bother. India started their innings with England 1.2 anyway, which was a great price at the time (although I didnt back it), but it had been 1.2 long before we even got there.

No GAA bets this week, but I'm thinking of backing Dublin for the All Ireland at 15/8 (I cant believe I just said that, I know, I know). The thinking behind it is, I'm pretty confident they'll beat Donegal (and would have them shorter than 2/5 tbh), so then presuming if Kerry beat Mayo, I cant see Dublin being as high as 15/8 to lift the trophy in the final, and they'd be healthy odds on against Mayo too if Mayo did beat Kerry. It would also soften the idea of them actually winning it, it'll be worse than the English soccer team winning the World Cup, but if I won money off it who cares. 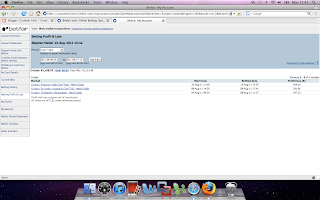