Fairly quiet week this week, we had the end of the T20 competition last weekend and today (even though I wasnt trading it because of the All Ireland) we had the semi finals of the 40 over competition, so that'll be that for having cricket on every day for the winter months.

Theres only one GAA game left this summer too with the hurling finishing up today, was delighted to see Kilkenny win, best team won dont think anyone could argue that. Luckily the boxing season started back on Sky on Saturday night, so that should somewhat replace GAA and at least hopefully chip in for the winter, liquidity wasnt great towards the start, but you can only make do with whats given, hopefully it'll pick up a bit over the next few weekends.

Speaking of boxing, if you love 24/7 as much as me you can watch the first one of Mayweather v Ortiz here. That Ortiz story is amazing when you think about it, the two boys raising themselves with nothing, but on the other hand, what sort of parents abandons children so young FFS..! And Mayweather is still, well, Mayweather. Although I do think the fight with the father at the end was a bit put on for the cameras, one thing that caught my eye was how many times Ortiz has been put on the floor in his last few fights, Mayweather by knockout is 9/4, no bookie has it that I can get on with and Betfair dont have that market up, but I thought it'd be shorter just from watching it.. I watched 24/7 before looking at the markets. No point having a bet before seeing the four 24/7s for more insight into the camps anyway.

The cricket was a bit lifeless this week, as I said just really have internationals now to go off, yesterdays ODI was voided because of rain, cant really make up my mind if I was happy or sad with it, but my book was like this at the time anyway:

And to follow on from the T20 ties last week, I said I'd want 60/1+ before thinking of covering it, the highest price matched was 55s on Eng v India. Its only a matter of opinion really but I'm happy to not cover it indefinitely, dont want to pass judgment because each to their own but those people backing 11 and 13 (a good bit out from the finish too) are just throwing money away long term. If you could lay 10/1 on a 60/1 shot every game you'd be laughing, the problem is finding someone to back 10/1 every game, as its a hit and miss low liquidity market all things considered. 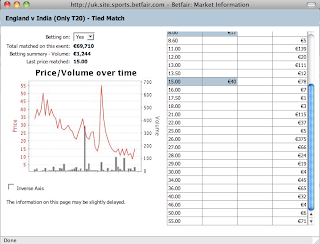 I stayed in bed and missed all the low odds lays on the draw in Sri Lanka too, pure laziness, 5-30AM is a horrible time though in fairness. I'll have to snap out of that sharpish to keep things ticking for the winter, the worst thing about that is getting up I nearly feel obliged to take a position, which is a terrible way of thinking in test cricket.. theres no way of solving that problem though. Its not like an Eng Test where you'd be watching it even without a position, so can easily pick and choose moments, but getting up at 5-30 to "wait and see how things go" is pretty hard to do for five days in a row..! 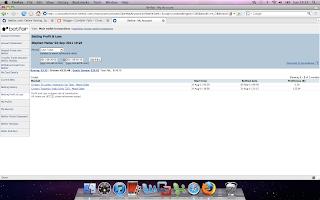