Following on from my post on discipline last week, this is another angle on doing things..

Whos the Daddy! I'm a huge Boardwalk Empire fan myself, great show. For anyone that watches, Chalky White is also the man.

Anyway, fairly quiet time on Betfair week only the two games/markets/days. I did actually get up to do both Bangs v Pak games but sure Bangs collapse so easy I shouldnt bother really, the market was dead quickly in the 1.0x's.

I thought the same was happening on the second India game this week but they drifted from 1.09 first innings to 1.6 at the break, I managed to start at 1.9 which was a nice starting point after an early wicket, it did bounce from 1.5 to 1.9s again afterwards but that wasnt too much of a worry because it was just back to where I started in the first place, and it was more or less a 1.01 train from there, with a few again stops of resistance - always works out well when the team you favour end up a 1.01 train though.

Was delighted to see Cotto really give Margarito a beating last night, IMO it proves Margarito used the illegal wraps last time they met, he only got caught with them in his next fight but anyone that watched 24/7 could see the photos after the first Cotto fight and judge for themselves, IMO he definitely used them, so a bit of boxing justice there! I ended up going out to watch that, and ended up at Fairyhouse today too so its been a busy weekend, really hoping Tiger can finish it off nicely tonight. No money on him because I thought 3/1 was a bit short at the start, hes slightly odds on as I type, but sure a Sunday night watching the golf from the couch with no hassle is always great when Tigers involved, although I have to say I dont really have a huge amount of faith in him getting it done, hopefully though, it'll be good for the game to have him back winning.

And lastly, I know it was around the place this week, I think it made the national news (Haha!), but I am a true romantic deep down really and you never know maybe Mark reads the blog. So Mark, if youre reading, I think youre a Daddy.. YAY! 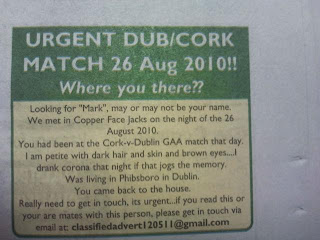 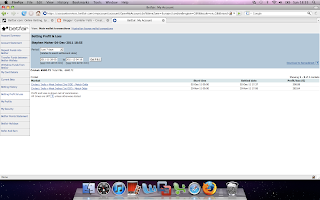