Well, hope everyone had a good Christmas and New Years. I managed to beat my chest infection and make it to Leopardstown so it was all good here, ventured down to Limerick on the 27th to see the new horse Kitty Dillon make her racecourse debut in the bumper, she finished 7th, but it wasnt so bad - her p2p and schooling races were over 3M and her breeding suggests she wants 2M6F+ too, wasnt really expecting a win you know yourself most bumpers are only 2M and sure we learned a bit about her anyway in that she wont be held up so much next time, she seemed to settle grand which was the reason for that anyway.

Being out in the real world on the 28th I missed all the amazing scenes taking place online, I was stood in the stands watching Voler La Vedette hose up unbeknown to the fact Betfair Towers were in complete meltdown! Obviously not being online at the time I have a more light hearted view of the situation, from what I have been told €25 million popped up at 29 (28/1) about 15 to 20 seconds into the race and stayed there until they reached the line, obviously everyone backed it at some stage, theres a video on YouTube of it..

You see there your man had €100,000+ green on her passing the post, so I assume a lot of people had big payouts. However, (again to say not being online at the time I have a more light hearted view so dont kill me) realistically every reasonable thinking and experienced person on Betfair would know it was a mistake and that there arent people sitting there with €600M+ sitting in an account, so even backing it (I would have lumped too) surely the thought process was theres a fair chance of a void market, and theres been an awful lot of fuss over, what in added hindsight, seems an obvious conclusion. Going back to the idea no one has €600M+ in their account, Voler absolutely hosed up by 4L+ and took the lead cruising before jumping the last, there was untold millions of "free money" available yet it wasnt all taken, simply because people dont have those sort of funds. And if everyone together hasnt got the funds to back it, no one person has the funds to lay it.

Anyway, being at the races I've been unable to take the two test matches on this week seriously, and both ended up being a small loss, trying to do something part-time always ends up arse ways, especially when its a test match and requires 6+ hours a day, but never mind thats something I already know..! I've been watching the darts too which have been great, unfortunately its the same craic as the Premier League and someone is miles ahead of the clock, which makes trading virtually impossible, but sure its good viewing anyway without a position, I presume I'll have to knock darts off the 2012 schedule completely but I'm going to do a 2011 review some time next week so I'll see then. ATM its looking like just cricket, GAA, boxing and a bit of 'specials' betting for 2012.

Hopefully anyway things will return to a bit normality next week and I'll be online more, but even then I'll miss the 2nd day of the Saffer test due to my Grandads birthday. It hasnt been a great series trading wise anyway so not much harm done and most of the next while will be waiting around for England v Pakistan I think! 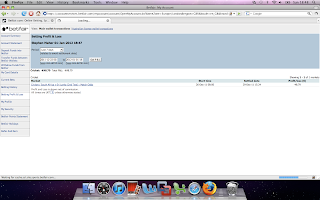