Nice day here with nothing out of the ordinary happening. Was out for the day and only backed one horse in Tipperary with the bookies, but laid off in running so a loss on the horses on Betfair but a win overall - which is the main thing. Annoying that I missed out on Whatuthink winning after staying he had a great chance to win at The Curragh on sunday but there was someone here and I totally forgot about it at the time. Backed the Saffers to beat Australia after seeing the prices after the first wicket fell when Australia were chasing a massive total. And stayed away from the darts on Betfair, backed Part to average under 92.5 with William Hill and I wasnt too sure watching the match wether I was winning or not, although I was only half watching it. I probably wont have another bet like that and it did take them nearly two hours to settle, it shouldnt take that long, it should be fairly simple. I suppose it stopped me having a bet on the other matches which was a good thing seeing the Taylor result. 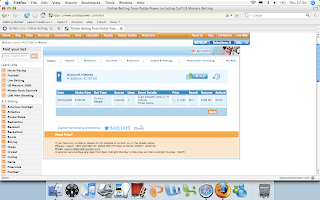 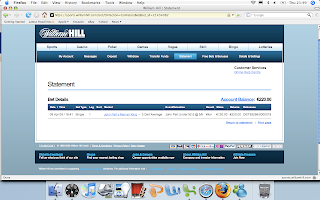