A fantastic day here ending with a profit of over €750! Thanks in most part to the cricket and taking the market on at low odds, the IPL started today and have to say I did everything right, didnt make a wrong move. Won just over €200 on the first match and just over €300 on the second match, laying teams at 1.5 and as low as 1.2, I did trade out so I couldnt lose but left all the profit on the team I fancied in each match and it paid off today, nice to kick off the 20/20 season with such a good win.

Its been a while coming since I started the blog, I think this is the biggest winning day so far and I'm delighted with that, its been hard work playing in small stakes against the big boys of Betfair and maybe not getting my rewards some days but you have to keep going. Got a late tip for the Bolger horse over in Newmarket so had €100 on it at 9/4 with Paddy Power and the screen shots below, stayed away from the horses on Betfair today as I'm not playing them well so best take a break I think. Just made plans to go tonight so I can celebrate a good day the proper way, by getting twisted! 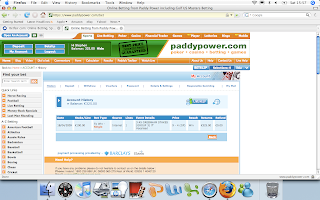