Another good day here but it wasnt without its worries, the cricket went fantastic again and I was €125 all green before the start of the second innings. Decided now to give the second game a miss as I have to go out in a little while. The tennis was Nadal winning the Monte Carlo Masters (backed at 1.4ish) but he didnt play too well at times and I was a bit nervous watching it. And the horses today were a bit of a nightmare, backed four horses, three lost but Johnny got me out of trouble on Stately Home (the last bet!), who did it nicely. Fame And Glory was very, very impressive today giving away 5lbs, no point taking the 8/1 now though after the race with AP having a few more still to come out.

Overall on the challenge, delighted that todays P&L puts me over the €5,000 mark after just seven weeks. I didnt think things would go this well starting with such a small bank and hopefully it will continue. Have two weeks of college exams starting the 27th of this month so things might slow down a little bit over the next while but cant wait until I'm finished college completely for the summer and can kick on everyday with getting to €100,000! I dont really expect to do it this summer and I'd be delighted to get over or near to €20,000 by August being honest. Hopefully I can keep moving forward anyway, its a big challenge in itself just not to lose in this game.

Fantastic P&L on the soccer today! Actually gutted because I backed 0-0 United v Everton and traded out at the same price because of the way the horses were going at the time, didnt want to lose too much, no idea how I won the one cent though, I'm not complaining as it all adds up. Anyway, heres the Betfair screen shot for the week.. 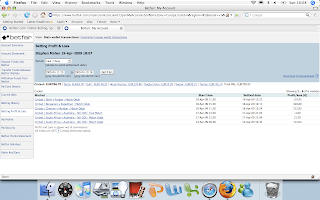