The first IPL match was a disaster as I said in the earlier post today, every trade went against me and I was always chasing the market. Never chase the market in 20/20. Although, I'm happy in the sense that I kept my head and wasnt looking at something like €20 green on one team and €1,500 red on the other, I'd rather be €250 all red or so, learned those lessons in the past, thats the only good thing that came out of the match to be honest. Played the second game well and should have won more for sure, but I let the first loss get in the way and went green way too soon, if I hadnt have lost over €300 on the first match I would have let the bet run a little longer like normal and it would have paid off, I was afraid to lose two games on the bounce though.

Its amazing how people always say taking days off from gambling is important. I took the last two days off completely away from cricket, came back this morning and just felt a bit out of touch in the market, it moves so fast and theres no time for thinking too much about stuff, you need to get on with it and I was slow in making decisions. Didnt plan on having a bet in Punchestown today after how poorly yesterday went but got a text saying Dunguib was out to evens, I had to back it at that price, he was so impressive too hes a machine. Backed United to beat Arsenal after that, it was a brilliant day with the bookies by all accounts. The cricket runs bet on the opening betsmen would have won again if I'd done it a second time too, have an exam tomorrow so wont get to back it again, but I'll be checking if the runs were under 20 when I get back. 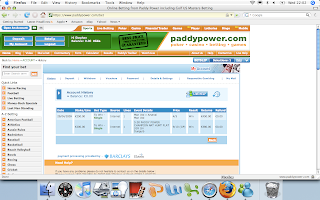