Big Bucks 2.00 Aintree 1pt win at 5/6 with VC bet.
My only worry about this fella today is will he handle the flat track, his last three wins have been at Cheltenham and hes looked in trouble at certain stages but then came back to win. If he hits a flat spot today he might not get away with it, but hopefully they'll go a good pace and he'll travel well. The main danger seems to be Mighty Man, having his coming back run the last day at Cheltenham might have well left its mark and he could bounce. But thats just a thought at the back of your head. I'd still fancy Big Bucks to be good enough to win here barring anything goes wrong.

Hebridean 2.35 Aintree 1pt win at 11/4 with William Hill.
What a cracking race this is. First thought was to be against Walkon when I seen the tissue last night and then I'd have Starluck and Hebridean running for me, but I dont like laying at the big meetings and I'm going to take a chance with Hebridean. Always liked him when he was down in AP's and was looking forward to him going hurdling for Paul Nicholls, today might be his chance as hes missed Cheltenham for this race, while his main market rivals were been aimed at Cheltenham and had hard races. Starluck didnt get up the hill, looked the winner too before finishing 4th in the end and Walkon had a hard race. It just might pay to be on Rubys mount today but I wouldnt be very confident in a race as good as this.

Denman 3.10 Aintree 2pts win at evens with VC bet.
Cant believe hes evens, looked at the race last night and thought I'm not backing him because I'm such a huge fan of Exotic Dancer, but at evens I cant not back Denman. If the real Denman shows up I think hes a better horse than Exotic Dancer. Everyone knows hes had problems and thats why hes the price he is, I'd have a small doubt that if Denman flys off in front he could set the race up for Exotic Dancer coming from behind but again if Denman is at his best I think he'll win. Will be a fantastic race to watch anyway.

Agus A Vic 3.45 Aintree 2pts win at 9/2 with William Hill.
Really like the look of this horse today and thought straight away it would be my main bet of the first day. Bit worried hes drifting though and I hope hes travelled over well, that said I've taken the 9/2 and hopefully he gets around safely, thats the main thing. The trip might be a bit on the short side but I was standing at the 2F marker the last day he won in Leopardstown and was impressed with the turn of foot there to go on and win easily. Hes a good jumper touch wood, and hopefully nothing like getting bought down happens today, I really think he is by far the best horse in the race.

Overall, cant help but think about last year at Aintree and how many odds on shots were turned over, it was a bloodbath. Cheltenham takes a lot out of horses and youve no idea until they run. Couldnt turn down some of the prices today, but I do like the idea of horses missing Cheltenham for Aintree, I wouldnt be lumping on Big Bucks or Denman today and I havent even backed them singly yet. I did have a cheeky €50 treble Big Bucks, Denman and Agus A Vic last night after taking to a mate about the days racing. I'll decide what to do nearer the off, but I think those four will all go very close to winning, I like Agus A Vic the most. Denman is a cracking price though. 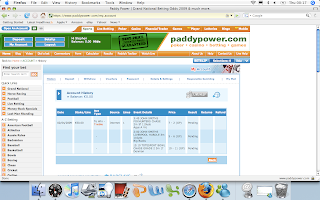 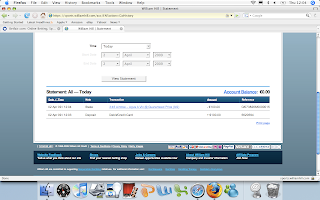