Just flicking though the snooker markets on William Hill this morning and seen they were making massive mistakes on the frame betting between Ding Junhui v Liang Wenbo in the 18th and 19th frames. Over 100 points was 28/1 and in the other market under 100 points was 28/1 aswell! Obviously a mistake by them but no harm chancing your arm and backing it. Sure enough both were losers, what luck! How lucky they were actually because one of the frames finished exactly on 100 points. But credit were credits due really they voided the markets, most people like to have a go at bookmakers, but it was a loser at the end of the day and I wouldnt have complained if they'd have kept my money. Anyway, looked for something to back with the €200 they gave me back, thought I owed it to them to bet it with them and picked out Chris Gayle to score over 23.5 runs in the second innings between Punjab v Kolkata, he is by far my favourite cricketer, when he starts teeing off theres no one better than him to watch. 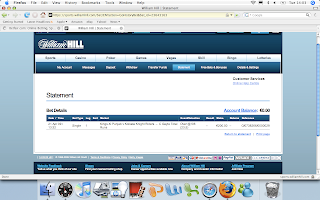