Frustrating day with the horses, finding it really hard to get matched in running. And when I did I lost, picked around four or five losers in a row coming from the back and it would have been a lot worse if it wasnt for two winners in Punchestown late on. The getting matched and the amount of money in the market is a bit worrying when theres no cricket and all I have during the day is the horses, I cant do anything about that though so will just accept it for what it is, I know I'm behind with the pictures, sometimes things happen on Betfair before they happen on the tv.

The cricket today was frustrating enough too, winning €130 on the game in England and then losing it all and more on the IPL game, Ross Taylor completely took it away from me with his innings. Cant complain overall though I suppose, I just dont like giving money back straight away. And it was a bit of a silly trade too with wickets in hand chasing a low total, but the way the IPL has been going lately you think nearly every game something mad will happen, today for the first time in a while it was a pretty stress free run chase.

The boxing tonight was absolutely fantastic! Got a massive profit getting a double up, with two winning singles on top. Had to venture to Ladbrokes for the double as they were best price, all credit goes to my mate Dec who rang me to back them, an excellent touch. 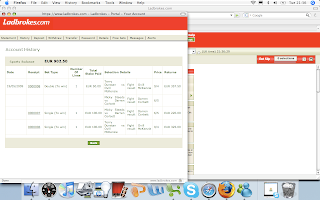