Wont say too much as theres someone here, but finally a winning day this week! Only thing that went wrong was the cricket, it was a 1.01 train from the 4th over in the first innings - I was laying at under 1.25 but it never worked out, happy with the new rule of not going over €200 and probably didnt lose as much as I would have normally done. The chase went all the way to the last over so happy enough with the bet, no complaints.

The horses went well and a great start to the daily horse to follow over on the side of the blog, only thing was I forgot to back it for the challenge, five minutes after the race "ah the horse!" look and hes won, what can you do. I like the idea of picking a horse every day and I'll do it from now on most likely without backing it - unless I really fancy it.

Losing day on Betfair but a good winning day with the bookies, backing a draw in the Ireland match, we always draw! And a boxing bet from my mate Dec, I trust him but jesus I was nervous about this one from round two, but what he told was exactly what happened really. I'm still amazed the small fella didnt get knocked out though. But delighted to be moving the total up instead of down! 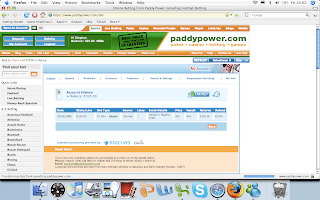 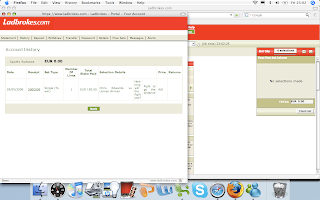