Annoyed, so annoyed. Just an absolute disaster on the England game, I was on them, then against them, then on them, then against them etc etc. End up losing near €300, dont mind the losing bit, just the completely stupid trading bit thats annoying me. Whats worse is all the time at the back of my head I knew they had enough. Anyway move on, one of those markets, disaster market. Never going my way and just kept making it worse. England were fantastic though. The GAA went well, even though I really do hate the Dublin football team, Meath are pants and Dublin were always going to win in the end so kept them onside, I suppose they'll win Leinster again this year before being beaten when they start to play the real teams. As is the story every year, but they'll be hyped and hyped.

Been another losing week on Betfair, even though I wasnt online for most of it! No real winning markets was the problem this week, although they came on Betdaq so its not all bad. Few big cricket losses but thats my best sport and I know it comes and goes like that. Havent gone forwards in a while and June has moved me a bit back now, want to correct that but theres no rush. Still going through an iffy spell of form and it does get in your head a bit, just struggling to put a few winning days together lately. I fully understand the pressures of doing this full-time with a wife and kids, it would be near impossible in this form.

But as I said, I'm not losing a great amount and I'll keep going because thats all you can do, might take one or two days off this week but we'll see, and thinking of putting €500 in Betdaq for the Irish racing and work with that bank, bet in €50s, going through the card each day on here to make me think more, I'll have a think about it. Just try something new to change a few things, its amazing, I keep having to each myself discipline every couple of months. 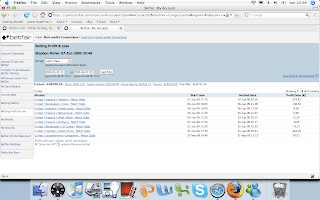