Not much betting at all yesterday, only a really small bet on the cricket. Anyway, today was hard, really hard - and I still think Ireland should have won! After laying Sri Lanka under 1.2 for €750 I'm still kicking myself I didnt win on the match, actually lost €70, Ireland were definitely in a winning position though. I think a few cooler heads in the middle order and we would have won for sure, there was a few silly shots when there didnt need to be when we lost wickets, that said the Sri Lanka bowlers are very good. The main point was Kevin O'Brien going for the big shot when he had only faced one ball already, calm down man, jesus we were only nine runs away in the end! Disappointed not to win on the market personally though.

As for the England v India game, I was favouring India the whole way through after they lost the second wicket. At one stage I had €200 red on England so I'm happy to get away with only a €50 loss, but it was a mistake laying England at 1.3, I could have got away with no loss at all. It was a bit silly and it all adds up to the total, dont need to be pushing things back like that.

The GAA was laying Waterford and then changing my mind and backing it back because Limerick were annoying me so much giving the ball away in scoring positions, it finished a draw, and I had laid Waterford at 1.4 for €500, sums up the day!

Overall this week has been alright, moved forward by €100 even though I lost on Betfair again. I have the daily horse to follow at the side up at around +10 pts profit now so I'll start backing the horse I pick every day for the challenge when I come back from Royal Ascot, also have a little idea for Betdaq but I'm still not sure its profitable and wont think about it until I come back either, and dont plan on having any bets with the bookies. Still in a bit of poor form with my trading so delighted to have a week off now, wont be posting until next Sunday but I'm sure I'll still be using Betfair while in Royal Ascot, and theres the cricket and golf on aswell. But mainly keep things tight, weather this little storm at the start of June and move forward again next week. Hopefully Royal Ascot will kick things off again, hope everyone has a good week! 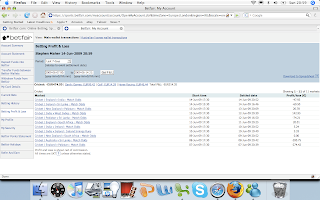