Got my exam results back yesterday and I passed them all with A's and B's, whos the daddy! I had around 35% attendance for the year as well, every hard to go into college, especially when theres cricket on in the winter (England v India) and its raining here, so to pass was a fantastic feeling! But, I did find out how terrible I am at playing blackjack after a night out, lost around €250 in around 15 minutes I think, dont remember much about the cards apart from the dealer getting 21 every time I got 20 and 20 every time I got 19, and a 60 year old mad women singing at the top of her voice beside me as we were playing. Never got her number, losing my touch.

Tried trading tennis yesterday seriously for the first time, and honestly I'd say it took about six years off my life. I wasnt even in bad positions, in fact good ones, but every shot feels so important because of how the odds are flying around, youre wishing the ball to go in every shot, and when it looks close its like "ohhhh dont hit the net" stressful. Anyone that does it every day, good luck to them! I did enjoy it though, I like the best of five sets, not too keen on best of three. Find hard to word this but - its like theres not much momentum in it, because say you get a really impressive 40-0 hold (no aces) on serve and then the other guy might do the same. And then a guy might lose a break point playing well, then lose his serve the next game. Its very hard to access the situation with the prices, theres a lot of what the market expects factored into the odds. That probably sounds simple to someone who bets on it everyday.

Not much to bet on today so spent the best part of the day on the golf course but did trade the womens cricket game, its still going on as I write this but its basically over, England trading at 1.01, have a screen shot below to show this - it was a case of one trade too many! But then I thought everything I did was a good bet at the time, the Aussies were in a great position, I had +€1,500 green on them before laying the 1.07 England for the second time (stupidly), what it did point out was that it was the only trade I did going against the market after a wicket fell and it lost, every other trade was going with the market and they won. Reckon thats massively important. I have to say my eyes lit up being able to lay England at 1.07 at the start, but did keep all my green on the Aussies, so had €12 green England and €1,500 green Australia when England were trading at 1.5, the smart money might have went all green at that point, I regret that. But anyway, it was near perfect trading, bar the last one obviously, and still end up losing when I could have won €600! All ifs buts and maybes of course and it only occurs to you after its happened, again for the second time this week I've found myself in a fantastic position but not close it out and it comes back to kick me up the arse. Green = Good, Greed = Bad. 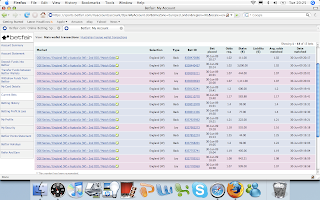