Bloody hell its a nightmare trying to get a price on Betfair with the early markets in Ireland! Given up, although I was trying for 50/1. Someone goes under you for €5 every price, annoying, wouldnt mind theres not that many people in the market anyway. I'm only trying to have €25 each way as well you'd think it was €500 each way. William Hill and Paddy Power go best priced 25/1 but might get bigger nearer the off on Betfair for todays horse.

Anyway, they normally aim for the drinking concert type crowd on the Friday night so its no surprise theres a few two year old races with not much form to go off, two hard handicaps and the Apprentice Derby. Bookies benefit I reckon tonight with question marks over every favourite, decided to spend the best part of the day on the golf course instead, traffic will be crazy getting there too.

I thought AP would have given Joseph a better ride in the Apprentice Derby at 7-00, Viceroy Of India is a stick! Look at his run at Leopardstown this year when he finished 3rd, he didnt want to go by at all, Johnny was in full drive mode and the horse was slowing down as he tried to push him into the lead of the final bend, I'm not in the business of laying 10/1 shots and I wont be laying this but I'd be truly amazed if he won. Cant really lay him for a place either because its a mad race, trust me.

Cabaret in the 6-30 was very close to being my pick, simply because its very difficult to find something to beat her. But she wasnt overly impressive on her first run, it looked like a lot of hard work to be honest and I would have thought AP would have stepped her up in trip after it, hes found a handy race tonight and she should win really, but evens is very short based on her first run, as I said though the thing is what beats her.

The listed race at 7-30 will be a cracker. You have Gold Bubbles, Famous, Elusive Galaxy and Intapeace, theres a reason why every one of them will win and theres a reason why every one of them will lose at the same time. Cant have a bet in this race but Gold Bubbles is definitely the best horse, Bolgers in terrible form though and backing anything at under 2/1 at the moment cant be done until he starts having a few winners in a row again. Surprised Famous is so short in the betting, got beat 7L first run by Intapeace, wouldnt be shocked if she won but I'd just want 4/1 or bigger to think about backing her.

That leaves the first race at 6-00 and my pick at around 25/1 each way, Xtraxtra. Massive price. I can totally understand why the bookies have put in Viscount Nelson as favourite with Ballydoyles record in this race, but the two year olds arent wound up for their first run and he would have to be up there with past winners to justify a price of 6/4. I've been told how well Kingsfort is working at home, the stable really like him so its more than likely he'll go off favourite, a Prendergast two year old first time out though, not for me as I've been burned before. I'm prepared to overlook the Bolger and Oxx horses, Bolgers would have to be special with the form hes in and Oxxes dont normally win first time out unless their special as well, although theres some money about for Oxxes.

That leaves me with Xtraxtra standing out. His last run doesnt look the most fantastic but he did have four very good horses in front of him that day and was far too free running with MJ in the saddle, hopefully he settles better because hes got a furlong extra to go today, which will more than likely help his cause and he likes The Curragh which is another plus. Theres no question in my mind he would have won on his second run if he had been drawn better, and the first run was a good one, Smullen said after the race he'd ride when not taken by Weld so theres obviously something about the horse he likes. The horses at the top of the market are bred to be far better than him but at 25/1 hes worth a shot each way in an open looking race, I think hes a bit of 'the forgotten horse' in the market, hopefully get a good run from him. 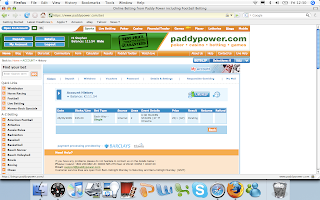