I'll be really busy in the morning and I've already done my bet so might as well put it up, very competitive card as you would expect for Derby day.

I will definitely be on the English horses in the sprint at 2-10, we dont have any top class sprinters and bar the English horses both underperform one of them should win. I backed Inxile the last day at Naas thinking he wouldnt have to come off the bridle, he didnt really impress me to be honest, made it look hard enough and that was a very weak race, I'd want him to improve from that. Have to say I dont know much about the other one Captain Gerrard, I see hes won on good to firm and on soft ground so no worries there, he ran a cracker at Royal Ascot and if he ran to that he'd probably win this handy enough, his form before that run is woeful though. It'll be close but I reckon one of them will win and its hard to pick between them, Benbaun is the only danger, anywhere else I wouldnt even think of him but he absolutely loves The Curragh.

And also, the fact that our sprinters arent fantastic it'll pay to be on Something in the 2-40 from the Dandy Nicholls yard, I think hes a great bet at 6/1 each way and will definitely be backing him on course tomorrow. He wouldnt have to be great to win this.

The railway stakes at 3-10 looks a bit weak compared to previous years, but I suppose weve no superstar two year old this year either bar steinbeck. The Ballydoyle runner Alfred Nobel isnt too exciting and you'd think he was here just because theres nothing else to run, he'd want to improve to win, although thats very likely to happen coming from AP's, hes no superstar but then none of the others are either. Kitty Kiernan has the best form and if Bolger was in better form I'd say she'd be near a certainty, no way I'm backing a Bolger horse this weekend though so prepared to let her go. And Love Lockdown is a really nice horse that improves with every run, I've a lot of time for him because he tries his best every run and is tough, he'll be hard to pass if in front with 200 yards to go tomorrow. As I said no real superstars and anything could win, King Ledley might go past the front three. If the ground was to dry up a bit more tonight and tomorrow, I'd edge towards Alfred Nobel at a good price hopefully.

You'd think Famous Name should have no trouble winning the 3-40. Has by far the best form in the race and its not a difficult race to win at all. If the ground does indeed dry up, it'll affect his main rivals more than it will him I reckon, Emily Blake and Jumbajukiba need soft ground to be seen at their best. Emily Blake is in foal and everyone knows how well mares in foal run, while the way the race pans out may favour Jumbajukiba getting first run. Really hard race to call with so many question marks about them all, I'm going for Famous Name with no confidence whatsoever, no rain and he could win it easy but hes not a horse you'd put your house on thats a certainty!

Speaking of certainties, Fame And Glory goes for the big one at 4.20! I love this horse, if Aiden would let me I'd marry this horse. Obviously its the Derby and it wont be easy tomorrow but you'd have to say all things considered he should win and win well. Hes already beaten Mourayan and its very difficult to see how that form will be turned around, Gan Amhras didnt run well at Epsom at all, again Bolgers form! Hes a big danger though along with Masterofthehorse, whos the only one in the field that really scares me. Brilliant horse, hes improved after every run and came from miles back at Epsom, if it turns into any kind of sprint at all he'll win thats for sure. But I trust Johnny not to let that happen, Fame And Glory has improved since Epsom and I fancied him while Sea The Stars was in the line up so I think hes an even better chance now, I think he'll win but it would be no surprise to see Masterofthehorse fly past with a few yards to the line, make it a test though and Fame And Glory will come out the better one hopefully! I'll be delighted if he does, and think hes a fantastic bet at evens.

While in the 5-05 I fancy Crowfoot to win, very rare you get an AP horse in a handicap on such a good mark, so low Johnny cant do the weight, really impressive when winning the last day on Ulster Derby day, sitting in behind coming late will suit him down to the ground. He has the right man on board for that, really needs it not to rain to have a chance of winning though, would be very worried if it rained. 5/1 or thereabouts is a fair price looking at the race. 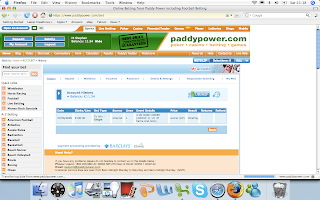